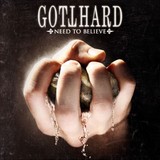 Review:
Gotthard are one of my favorite melodic rock bands and I’m rarely disappointed in any of their releases. Need To Believe is no exception for me.

Starting off with “Shangri La” isn’t the best indication of what is in store and probably not the best choice for an opening song/single. The second track “Unspoken Words” is more appealing in the Gotthard style. “Don’t Let Me Down” I first found a little dull, but the fantastic lyrics and musicianship that is Gotthard are so good it saves it.

Not being a huge fan of ballads this Gotthard disc has more slower numbers than I’d normally like with any other group, but these guys get away with it, delivering songs with more exuberance and appeal than the ‘slit-my-wrist’ type ballads you find with a lot of other bands. The sheer vitality in the voice of Steve Lee transform the slower tracks from being another anonymous, sleep inducing and braining numbing pile of sap into something much more. It really isn’t until the second half of the CD that Gotthard mixes in more rockers with incredible tracks like “I Don’t Mind”, “Right From Wrong”, “Rebel Soul” and “Ain’t Enough”.

Gotthard have a solid discography and there is always something to like on every release. While this won’t be my Domino Effect – a disc I consider one of their best, although others may not – Gotthard don’t let me down on “Need To Believe”.

If you are already a Gotthard fan you don’t need me to tell you to go and buy this, if you haven’t already. This CD is classic Gotthard that reeks of their usual close to perfect production (this time handled by the legendary Richard Chycki) and professionalism. Need To Believe is another fine slice of melodic hard rock from one of Switzerland’s top selling, most consistent and most reliable bands.