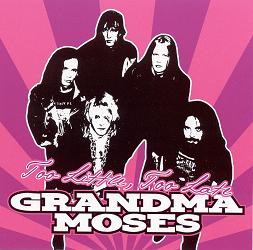 GRANDMA MOSES
TOO LITTLE, TOO LATE
Released in 2004 (Perris Records)

Review:
Grandma Moses brought their in-your-face brand of punk-influenced sleaze rock to the streets of Vancouver in 1991. Too Little, Too Late essentially captures all of the band’s high and lows since their conception, and musically everything is short, aggressive and to the point. Glam fans may remember the name of drummer Sandy Hazard who was part of the original Pretty Boy Floyd (the version from Canada, not the L.A. Strip).

The best songs on this 23 song release include “Little America” which reminds me both musically and vocally of L.A. Guns‘ “Malaria”. “Chinese Rocks” and “7-11” have a Ramones vibe throughout them and in the next breath something like “Workin’ Class Whore” slides straight into the 80s sleaze metal category, complete with up-tempo guitars. “Death To The 60’s” scores points for its lyrical content alone — “I wish that I was born in 1967, so I could see all those 60’s rejects go to heaven”. Some of the band’s first demos are their most impressive, especially something like “Engine Number 9” where the band shies away from the punk and just rocks, or “River Of Tears” with its Sea Hags approach. “Dismal Jimmy” even sounds like Tesla on a bad acid trip.

Mean, nasty, dirty, short and to the point are words that can be used to explain Grandma Moses‘ sound. Political incorrectness like this is what every sleaze band should employ; check out Too Little, Too Late for yourself at grandmamoses.net.