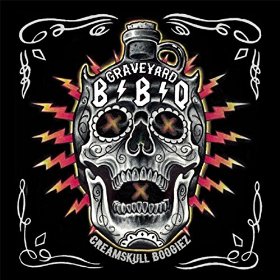 Review:
“Ladies and gentlemen — it’s boogie time!” Those are the first words that you will hear on Graveyard BBQ‘s new EP Creamskull Boogiez before the group’s main and lone man Brownbag Johnson launches into more of a heavy metal — grab you by the balls — type rock and roll boogie. Creamskull Boogiez never lets up just hitting you time after time with ferocious guitar riffs, pounding drum beats and growling vocals at faster than expected pace all courtesy of Johnson.

The opening guitar riff and beat for “Creamskull Boogie” reminds me a lot of the opening for “Long Time” which is one of my favorite Joan Jett & The Blackhearts songs. “Creamskull Boogie” quickly launches into an all out in your face affair complete with Quentin Tarantino like styled theme music. Next up is a cover of ZZ Top‘s ’70s gem “Beer Drinkers & Hellraisers” which fits in so nicely with Johnson‘s own material that you would likely never know that it is a cover song if you were not familiar with the ZZ Top classic. Did I mention that Creamskull Boogiez never lets up? “Hellride” is exactly that — a nasty riff based sleazy rocker that reminds me of a combination of the Hellbros and The Wild!‘s fastest paced material.

There appears to be some potential copyright infringement at times with glimpses of songs from more well known artists making short albeit brief appearances during certain songs on Creamskull Boogiez. You’ll know what I am talking about as soon as you hear the various glimpses of those songs but I’ll let you have the fun of hearing them yourself as you crank the album up. The world likely does not need another cover of “Born To Be Wild” but Johnson apparently felt compelled to do so. That being said, “Born To Be Wild” fits right in with the other Graveyard BBQ tunes on Creamskull Boogiez and it does get the heavy metal rock and rill boogie treatment from Johnson, which makes it fun to listen to even though it feels like I have heard “Born To Be Wild” a million times.

Graveyard BBQ‘s Creamskull Boogiez is not for the faint of heart. It is pure adrenaline fuelled, dirty, heavy rock and roll, boogie style that will likely leave you thirsty for some quench tasting beer or whiskey in a hurry. Creamskull Boogiez is the type of record that is played all night long, in some seedy dirty hole of a ground bar in the middle of nowhere, with patrons that would not be surprised in the least to be passed out at the end of the night, outdoors, on the ground, in a puddle of booze and vomit.