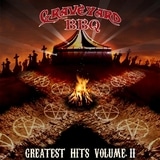 Review:
How the hell did I miss out on Graveyard BBQ when this disc arrived in 2007? I have no idea, but this is a classic case of better late than never. Calling this CD Greatest Hits Volume II is quite a coup considering the only way the Graveyard BBQ will have a ‘hit’ is if an errant slab of beef flies off the BBQ grill and clubs one of the band members on the forehead!

That doesn’t mean this album sucks, far from it – it just means that the Graveyard BBQ‘s brand of alcohol-fueled aggression will never be accepted by the mainstream. Oh well, that is their loss and our gain! What makes the band work so well is how they constantly mix things up and include a healthy does of humor to the whole affair. It really is a recipe for great music, and likely better than anything these fucked up sleazebags could put together over the coal pit.

Occasionally the band does go overboard, slipping into Pantera territory on songs such as “The Clothes That Make The Man” and “Meat Yer Enemy”. Don’t let that scare you away though, because for the most part these guys sound like Raging Slab coming completely unhinged, and the rapid-fire drumming of “Creamskull Boogie” and a killer rendition of AC/DC‘s “Dirty Deeds Done Dirt Cheap” more than make up for the odd miscue. And that doesn’t even take into account the best of these ‘greatest hits’! That honor is reserved for the female vocal backed “BBQ Girl”, the southern-boogie of “Teazer” and “Ride The Stache”, the latter being a flawless combination of sleaze and aggression – and a hell of a bargain at “5 cents to ride the stache”!

Greatest Hits Volume II is as fucked up as music is allowed to get without becoming completely unlistenable. It comes as no surprise that Graveyard BBQ recently won a ‘High Times Doobie Award’, and judging by the music these guys have served up I’m recommending that cannabis be included as a side-dish at every BBQ. This is one cook-out party that everyone should attend!