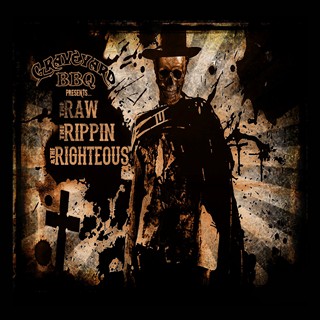 Review:
An ominous sky looms overhead until a deafening crack splits the heavens and delivers a man known as Brownbag Johnson — fists filled with instruments, wearing a Grill ‘Em All barbecue apron, with steak sauce dripping from his unshaven chin. That’s the otherworldly image I picture when spinning Graveyard BBQ‘s newest release The Raw, The Rippin & The Righteous.

Like a spaghetti western revamped to outrageous proportions by Quentin Tarantino, the one man band known as Graveyard BBQ deliver an excellent, albeit criminally too short, slab of sleazy hard rock. A 15 second throw-away starts things off before what could be considered the true intro, “The Man With No Name”, really gets the ball rolling. An instrumental that delivers a heavy punch, the song builds up for the EP’s crowning achievement — the flawless ass-kicker “The Rustler”. Off the top of my head I can’t think of a better song released this year as it is just over four minutes of perfection that includes a talk-box guitar riff that makes Peter Frampton‘s use of the gadget seem like a kindergarten project, gruff vocals and a heaviness that could be delivered by Norse Gods themselves.

Really, anything after “The Rustler” is going to be a letdown (the song is that good), but an unplugged version of “The Clothes That Makes The Man” and a furious rendition of “Who Do You Love” (that takes George Thorogood‘s version to extremes) each hold their own. One thing I have to mention is how great the drums sound on this EP — Brownbag Johnson doesn’t just keep a steady beat, it often sounds like he is smashing his set with Thor’s hammer.

It’s been six long years since Graveyard BBQ‘s last release Greatest Hits Volume II, and despite not even having a whiff of a ‘hit’, the song “Ride The Stache” is still in heavy rotation here at Sleaze Roxx — and “The Rustler” rivals it in every way. The first in a series of upcoming EPs, The Raw, The Rippin & The Righteous makes me salivate thinking of what may come next from this Los Angeles ‘band’. One thing I know for sure is this… I want more new original material!