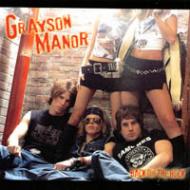 GRAYSON MANOR
BACK ON THE ROCK
Released 2003 (Grayson Records)

Review:
I attended a Kip Winger and Dokken concert last year in Arizona. An unknown band named “Grayson Manor” kicked off the show. I felt like it was 1989 again…the piss boring lack of showmanship that lives in modern bands inspired by the equally piss boring grunge revolution was nowhere to be found. You had four guys up on stage that almost stole the show from the metal legends that were still left to perform. I picked up their album because I liked what I heard and have finally decided to give it a review.

Those in search of the classic metal sound and are not finding it on new releases from bands from that genre have a reason to smile. Grayson Manor‘s record Back On The Rock is a short but oh so sweet record that brings me back to Motley Crue‘s Too Fast For Love. As a matter of fact, the boys did a cover of “Live Wire” that night in concert. It’s a shame they didn’t include it on this disc.

The record kicks off with “Ragdoll”. Don’t worry; this is not an Aerosmith cover. If it were, I’d be telling you why covering a band that has absolutely no attitude left is a bad thing…once you dance with N Sync, you retire your rock rights and become pop and pop alone. “Ragdoll” is a fast rocker that reveals a lot about the band. They have great hair influences. Brad Cox, the vocalist, has the perfect high pitched hair metal voice which would have given Vince Neil and Mark Slaughter a run for their money 15 years ago. This track sets the stage for what the rest of the album will be like.

“Enemy” is a cool cut with a little punk flavor to it. Something about it sounds like something a really rocked out Billy Idol would release.

“Down And Dirty” may as well be Motley Crue. Nikki should take notes on how to sound like classic Crue because Brides Of Destruction sure isn’t it. Great song and so very classic Crue, I love it.

“Losing Salvation” is my favorite song off the record. It has a haunting melody with hair inspired screams and blazing guitar work. Color me impressed.

“No More, No Way” is another great song. The only negative about the song is I didn’t write it and play it in front of my former fiance’s house. It is a pretty direct and slightly angry song about a girl. I love those…that’s what happens when you are battle scarred by love.

“One Shot” is the final cut off the disc. Like all final cuts should be, this one leaves you begging for more! This tune is as raw and energetic as the Motley Crue Too Fast For Love record.

Back On The Rock is a wise purchase. It is awesome to hear a new band do something with a little energy and not be coma inducing…see Staind. Bottom line, I would go see these guys even without my metal forefathers headlining. They are a high-energy rock band that had a lot of untapped potential. Keep your eye out for Grayson Manor!

You can buy this CD and more by going to http://www.bradcoxrocks.com.