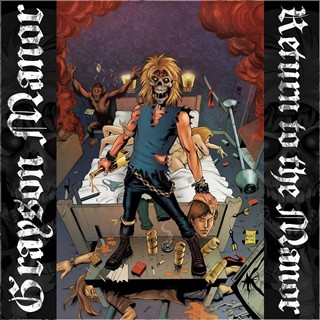 Review:
It’s been several years since I last heard from Grayson Manor and I just assumed they were another casualty of the cruel and unforgiving business of music. However the band isn’t dead just yet, although the only remaining member from their humble beginnings is frontman Brad Cox, who has always been the mastermind and principle songwriter behind Grayson Manor.

Considering Return To The Manor represents the first new music released by the band since 2006’s Children Of The Manor, a three song EP may be the perfect way to reintroduce these Georgia based rockers. That may also explain why Grayson Manor uses these three songs to display three different sides to the band’s sound. The opener “Shake Me” is full-throttle sleaze anthem in the vein of early Skid Row and show that Brad Cox and company still have something to prove. “I’m Still Here” in turn is your typical keyboard driven power ballad that begins with the feel of Warrant‘s “I Saw Red” before splitting off onto its own. Wrapping things up is “Bye Bye To Love”, a harder rocker that delivers a more melodic side to the band and in turn has a chorus that just begs to be sung along to.

Return To The Manor shows that not only are Grayson Manor back with a new lease on life, but that they are also completely rejuvenated. I suppose the purpose of these three songs is to test the waters and see if they create any interest in a band that has long been forgotten — and in that case Return To The Manor is a roaring success. Not only did each of these songs impress me, but they have me salivating for more — so show Grayson Manor some love so we can all get a better taste in the near future.