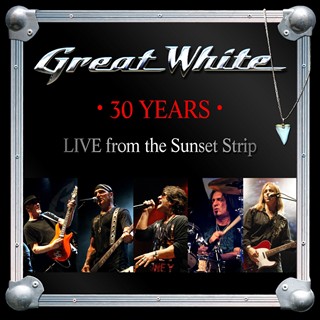 Review:
Thirty years is a hell of a long time to weather the fickle music industry that is used to chewing up and spitting out bands at word record speeds. For three decades Great White plodded along with their glam meets blues formula, releasing quality albums regardless of the current commercial trends, and celebrated by going ‘home’ to play a show at Hollywood’s Key Club. If anyone deserves a 30th anniversary retrospective it is Great White, unfortunately this isn’t the band we all remember and love.

Gone is the voice of the band and the man who sang the ‘hits’ — Jack Russell. Replacing him is Terry Ilous of XYZ fame, who does a decent job of emulating the ousted frontman by singing his heart out during Great White staples such as “Lady Red Light”, “Can’t Shake It”, “Once Bitten Twice Shy”, and the surprisingly impressive “Rock Me” However he also stumbles along on tracks like “Face The Day”, “House Of Broken Love” and “Mista Bone” — the latter in particular ends up being atrocious with its signature swagger all but ripped out. And in all honesty, as much as I like the song, isn’t it time to put “Desert Moon” to rest considering the tragic events that took place in Rhode Island ten years ago?

The biggest problem with 30 Years: Live From The Sunset Strip though is the lackluster sound quality. Of course this disc was recorded at a small club by a band who many outside the hard rock genre would consider past their prime, so a big budget was likely out of the question. If you need to experience Great White live in the comfort of your own home you would be better served grabbing 1995’s Stage — a collection with a far superior sound, livelier crowd interaction, and the original voice. The only way 30 Years eclipses Stage is in the setlist category, as this song selection caters more to the casual Great White fan.

30 Years: Live From The Sunset Strip is as if you’re listening to a Great White tribute act that hit some highs and a few lows — with a killer guitarist. Really, it is guitar wizard Mark Kendall (who has always been among my favorites) that saves this album as his hands slither up and down the fret-board just like they did on those classic albums. I’m indifferent to the addition of Ilous, because I feel he is doing his best with an awkward situation and is by no means tarnishing the Great White brand. Having said that, I’d prefer Russell and Kendall set aside their differences for a true 30th anniversary. After so many years together on the road, so many laughs and tears, there has to be some mutual admiration between the two musicians that only time will heal.