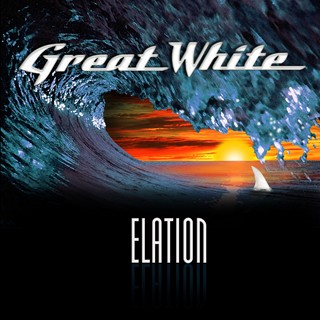 Review:
Is there anything more frustrating than an established band breaking apart and being reduced to slagging each other in the press? Great White is the latest group to suffer such a fate as vocalist Jack Russell, who has been battling health problems, was cast aside in favor of XYZ‘s Terry Ilous — and the mud-slinging quickly took on a life of its own. Fans are then left to choose sides, meaning it is a no-win situation for everyone involved.

To give Elation a fair shake one has to explore the album with no pre-conceived notions — but I admit that is difficult to do, because at every turn I keep thinking how much better this effort would be with Russell at the helm. For me Great White has always succeeded due to Russell‘s soulful vocal delivery and Mark Kendall‘s bluesy guitar riffs (arguable one of the most underrated musicians of the hard rock genre), but when you strip one of those elements away it changes the entire complexion. Ilous, who always sounds great, is in a difficult spot because he can never be ‘the’ voice of Great White, and on Elation things work best when he loses his own identity and tries to emulate Russell himself.

One thing I like about Elation is that this new line-up seems to have jump started Great White, as the album is far more up-tempo than Rising and Back To The Rhythm. It would seem that the addition of Ilous has re-energized Kendall and company as they rip through tracks such as “(I’ve Got) Something For You”, “Feelin’ So Much Better”, “Heart Of A Man”, “Shotgun Willie’s” and the vintage sounding “Just For Tonight”. Of course the slower material that seems to have dictated Great White‘s latter releases is still prevalent, but the new vocalist steers songs like “Love Train” and “Hard To Say Goodbye” into XYZ territory — and last time I looked this disc was stamped ‘Great White‘.

And maybe it is just me, but I was a bit offended by the lyrics of “Love Is Enough”. For a group of musicians that have been slinging petty and childish remarks to each other, and even resorting to legal action, the chorus of “After all that we’ve been through, still believe in me and you” rubbed me the wrong way.

I realize relationships can sour over time, but for a band that has gone through as much heartbreak as Great White you would think the disgruntled members could toss their differences aside. However the damage may truly be done at this point, and what we are left with is a band that hits all the right notes yet doesn’t really sound like Great White. The strange thing about Elation is that it floats in some sort of hard rock neverland — Jack Russell followers won’t hate it as much as they want too, and hardcore Great White fans won’t be as blown away as they hoped to be. With Mark Kendall on guitar you really can’t go wrong, but without his longtime partner Jack Russell, Elation isn’t all it could be.