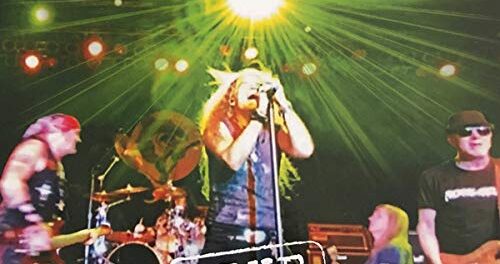 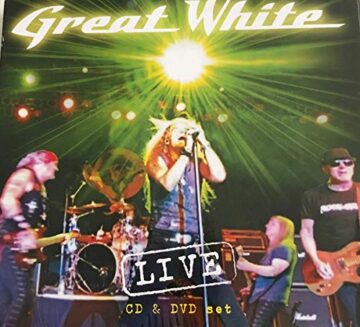 Review:
Great White are one of a few bands that have two versions, of sorts, on the road — or did when the road was a thing before the pandemic stopped the world from turning. There is Jack Russell‘s version which has the benefit of the original vocalist from the classic material which is known as Jack Russell’s Great White. Then, there’s just… Great White! This version features Mark Kendall, Michael Lardie and Audie Desbrow from the most well-known version of the band. Their benefit? They are the musical force behind the Great White sound and, in a lot of cases, wrote a good number of the songs as well. Their negative? Not having Jack‘s voice.

When Jack left Great White after a medical scare that nearly cost him his life brought on by bad choices, the future of Great White was in question for sure. They had a few different people sing for them before landing where they’ve landed now. Jani Lane was their singer for a little while. XYZ‘s Terry Ilous filled the bill fairly well for a little while, and now Mitch Malloy is the vocalist de jour for the veteran bluesy hard rock band. Jani was a temporary fix and he passed away almost 10 years ago (if you can believe that) and never was officially the band’s guy although he played more shows than not while Jack was laid up. But, Terry and Mitch have both released new music with the rest of the Great White band and the results have been mixed. Terry‘s last record with the band was very surf inspired which was far from what I, as a diehard fan, was looking for. Great White have yet to release new songs with Mitch Malloy on lead vocals. How would a release featuring many of the classic tracks sound without Jack‘s voice? That was the test. And, I think they knew that was going to be the test.

In 2008, I saw Great White at the Marquee Theater in Tempe, Arizona. A fight, a pretty violent one, broke out about two or three people away from me and fists were flying. At least one person was ejected. While the fight was happening, Jack broke out the “Mickey Mouse Club” theme song to play with the audience as order was restored. It was at that moment that I realized that the vocalist of a band is much more than the guy who hits the notes but he’s the master of ceremonies. He is the Grand Poobah of a rock ‘n’ roll show. Jack taught me that with his quick actions that took a crowd from turning angry and getting pissed at the idiocy beside us to a crowd laughing and singing a pre-school song with a Los Angeles rock band. That is a special kind of special. I realize that’s redundant. But, I’m not changing it. Jack is special and not “was” but “is.” Replacing him could not have been easy for the boys of Great White. But, his personal issues, which are well documented, might just have been too much for them to cope with. I get it. I don’t have to like it. But, I do understand their point of view. And, I think they understand some of the fans’ point of view that no one can fill that role quite like Jack. And if they don’t know that, they don’t know Jack! Sorry, I had to do that to amuse myself.

So, in anger after they released a promo video which I believe was from this now released CD/DVD, I dubbed Mitch Malloy as “Redneck Big Bird” and I ragged on him and the band… I wasn’t all that welcoming of Mitch as the new leader of the band. After this release, I’m a little more accepting. But, more like a step-son who tolerates his step-dad. The roots don’t run deep! So, I’ve rambled a bit. Lets get to the review!

The band takes the stage to a new song called “I’m Alright” which I presume is a song that has hidden references to the above separation from their singer. The band is OK without him. It is a good song in and of itself. But, if I was to play said song on a classic rock radio station and ask the audience to call in and guess the artist, they probably would say Bad Company or, perhaps Boston, but not Great White. It just isn’t quite as biting, pun intended, as the all mighty shark rockers. But, it was an interesting way to start a the release. “Lady Red Light” follows and I think they found a good range for Mitch. He can do a little bit of the powerful rock vocals when push comes to shove though I get the vibe that he would rather stay in a more smooth bluesy range. Nevertheless, I think he shines more in this tempo and register more than elsewhere. The same can be said about “Desert Moon” which followed next.

“House of Broken Love” was up next with a good display by the band. This is such a great song and if you ever examine the lyrics and don’t just listen to them as passing words that fit the melody, it is pretty damn deep too. We’ve all been there… I sure have! “Big Time” got the big song treatment though it is a new one. It got the whole sing along and the performance as if it was a top charting track for the band and everyone already knew it. The truth is probably different than the perception. But, I will say that this track more than “I’m Alright” fits the mold of the band’s sound. “Save Your Love” is a song I like as a fan but find I skip over when it comes up on a CD. Because I wanted to see the whole show, I kept it on and enjoyed Mitch‘s take. I don’t know if he sounds more like Jack anywhere else on the album than here. Keep in mind, I think he makes no effort to be a sound-alike… Nor should he!

Before I give my final verdict on Mitch who was and remains the wild card coming into and at this point of the review, can we all stop for a moment and honor just how talented Michael Lardie is? He plays every freaking instrument, it would seem, and does it so flawlessly. When people talk about the great musicians of the hair metal genre, they often mention the Tracii Guns, Slash, and George Lynch‘s of the genre but rarely does Michael Lardie get the nod he deserves. After watching the DVD, I remembered a post on the Sleaze Roxx forum back when it was around and someone said to put together your own “Hair Metal Super Group.”. Now, I’d have to say it would be Tom Keifer, Jeff Pilson, Michael Lardie, Warren DeMartini and Steven Sweet. Lardie is truly a special talent who probably would be more recognized if he was a little more vocal and out there in the interview media realm.

I want to compliment Mitch Malloy for holding his own from a skeptical eye I went in with. He danced around, he involved the audience, and he did deliver vocally more than he fell short. I’m sure somebody in the comments below will tell me Mitch is ten times the vocalist Jack is. On a technical level, there might be some truth to that. But, Jack‘s voice harbored such power. While he changed a little as time went on, the angry young man that screamed out “Stick It” and “On Your Knees” could and still can be heard when Jack gets going. I would not want to hear Mitch even attempt those songs because it would so not be in his vocal wheelhouse. I think that both he and the rest of the band know that and that is why the material stayed away from that. I would have liked to have heard Mitch‘s vocal take on “Old Rose Motel” which relied so heavily on Jack‘s incredible vocals, which were probably at their peak on that album. But, there is always going to see them live and hoping it makes the set list.

Overall, if you like Great White, you’ll like this CD/DVD. I got mine signed and will have it on display with a 2007 setlist and drum stick from a show they did headlining with Jani Lane outside an Arizona Cardinals pre-season football game at what is now State Farm Stadium in Glendale, Arizona. That setlist and drum stick have been hung on the office wall for over 13 years. And, it will be hung there for many more years to come this time with the signed CD in the frame with it. These guys are one of my favorite bands and though I still am not totally on board with anyone but Jack singing the classics, I would go see Great White with Mitch Malloy on vocals should they come around when the world starts turning again… That is, as long as it isn’t with Skid Row. I cannot and will not endure the guy from Dragon Force doing his best Sebastian Bach impression. Hot garbage.