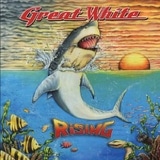 Review:
Great White has been tested in a manner unlike any band from their time, they have been to hell and back and then some.

Great White rose from the ashes of the tragic fire at The Station nightclub with heavy hearts and resumed performing live years later. But the band has changed since that horrible accident, and I’m not referring to Mark Kendall‘s shaven head or Jack Russell‘s plastic surgery. The songs the band now plays are deeper, not the sleazy, raunchy, cock rock that they released in the late 80’s (such as “Mista Bone”). Instead you get straight forward contemporary rock ‘n’ roll; it’s not hook heavy like AOR, in fact it borders on the bland and mundane.

Rising will take several spins for even the most die hard Great White to get into. And even when you do you’ll be left scratching your head, thinking, “just what exactly happened here?” It’s a hard pill to swallow, as Great White are no longer following their traditional formula of blues influenced rock meets the seedy lifestyle of the Sunset Strip. While Rising will not earn them any new fans it does offer up heartfelt, passionate lyrics with a retro yet very current sound. I liken it to a modern day Grand Funk Railroad or something along those lines.

The standout tracks on Rising are “Danger Zone” and the closer “My Sanctuary”. Great White‘s latest CD could be a welcome change if you have the patience and the time.