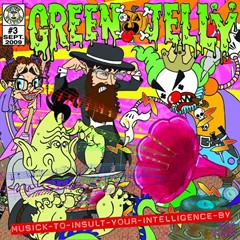 Review:
If you spent any time watching MTV back in 1993 you couldn’t help but see Green Jelly‘s claymation video for “Three Little Pigs”, it seemed to get hourly airplay and should go down in history as one of the most entertaining videos ever released. However, like any other one-hit wonder, Green Jelly was completely forgotten about aside for that infamous single — despite the fact that the album it came from, the multi-platinum Cereal Killer Soundtrack, was much better than anyone could have expected from such a gimmicky band. A year later came the disappointing follow-up 333, proving that Green Jelly‘s 15 minutes of fame had long expired.

Even though Green Jelly failed to impress me on their last album, I still had a soft spot for the Cereal Killer Soundtrack and decided to take a chance on Musick To Insult Your Intelligence By. It had been 15 years since the band’s last studio album and I was secretly hoping for an under-the-radar gem — a return to their irreverent, hilarious and lawsuit creating glory days. Sadly the ‘Cowgod’ took a big dump on my hopes, proving once again that some things really are better off dead.

To put things in perspective, the first time I spun this CD I couldn’t even get all the way through and as I kept trying it just didn’t get any better. One of the things that made Green jelly so enjoyable in the past was their sense of humor, but even that sounds forced on Musick To Insult Your Intelligence By. As for the music itself, let’s just say there is nothing that comes remotely close to “Electric Harley House (Of Love)”, “Obey The Cowgod” or even “The Bear Song”. Each song seems to blend into the next with only “Sugar & Spice”, “Stabby The Clown”, “Trick Or Treat” and the female sung “Nothing To Say” even hinting at the band’s former glory.

Critics have always discarded Green Jelly as being style over substance, and while that may not have been true in the past, it is now. I’m sure their live shows, complete with GWAR influenced costumes, are a blast but this CD is anything but. The idea of Green Jelly returning piqued my interest, instead we got a plodding and rather boring release — a CD that will only solidify their ‘one-hit wonder’ status.