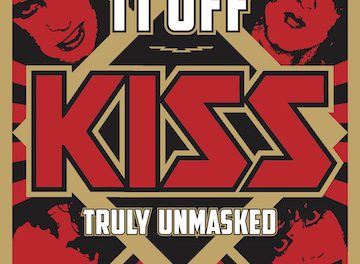 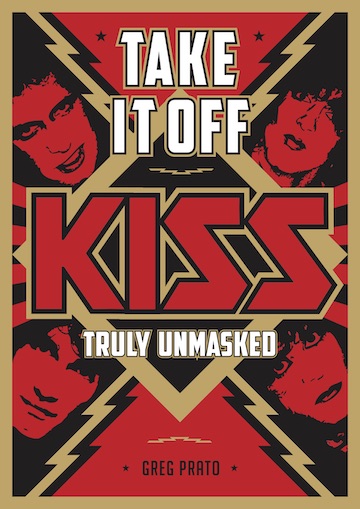 Review:
Many music fans think of the band KISS as the group with makeup, blood spitting, fire breathing stage shows, filled with lights and pyrotechnics that influenced many of the music acts that followed them, from bands in the 1980s hard rock glam scene to acts like Garth Brooks. Some critics have scoffed at the fact that the band was all show and no substance. What these critics forget is the fact that the non-makeup years were just as good as the era when the band put on the makeup.

In his book Take It Off – KISS Truly Unmasked (Jawbone Press, 2019), Greg Prato looks at the era of the band without the makeup (the years 1983-1997). Prato, who also wrote the wonderful book about KISS drummer Eric Carr, walks the reader through each album, along with commentary from some of the songwriters, radio personalities like Eddie Trunk, and the guitarist at the time Bruce Kulick.

The foreword of the book is written by wrestler/podcast/author/ singer Chris Jericho, who describes first seeing the “Heaven’s On Fire” video on television, which made him become a KISS fan. Jericho writes about how the non-makeup years was the KISS he was first exposed to, and has become a fan ever since. In fact, Jericho has had Paul Stanley and Gene Simmons on his podcasts and his band even played the KISS Kruise.

Starting off with the Lick It Up album, where the band made their famous unveiling on MTV without the makeup for the first time, the chapter has several different people discussing their opinions on taking the makeup off, from Geddy Lee of Rush to Mike Reno of Loverboy. Each chapter then walks through each album, along with extra contributions from people like Steve Ferris of the band Mr. Mister who at one time auditioned for the band, to podcasting personality Mitch Lafon, and singer Ron Keel (Simmons produced a few Keel albums back in the ’80s).

The text has wonderful stories from songwriters and video producers (and the album producers) telling stories that some fans may not have heard (and some that are disputed by the famous rumors). Some stories such as Bruce Kulick coming in to help on some of the Animalize recordings because then guitarist Mark St. John couldn’t remember the parts (which Kulick ended up being the guitarist for KISS after a few shows into that tour), how Stanley’s opening to “Heaven’s On Fire” was an accident in the studio that got kept in, and how the KISS conventions got started due to former KISS manager Bill Aucoin not paying rent on a warehouse storage unit. More stories involve the time a radio host, who ran a pirated show, got permission from Stanley to play a track before the Revenge album came out, only to receive a cease and desist letter, which Paul read on the air of the show from his own label.

There are few parts of the book that didn’t make much sense to me, for being a huge fan of this time period. One part involves Judas Priest guitarist K.K. Downing discussing the music videos of the 1980s and a small story about opening for the band. Normally this would be an interesting part to the book, from someone who was a peer of KISS during the time, but there was hardly any mention (besides the one story) about KISS, and more about Priest’s budgets on their videos.

Another meaningless section is an interview with Katherine Turman, a rock journalist who even wrote for Simmons’ Tongue magazine. The topic used here is discussing the lyrical content of KISS and their views on women in the society (today and now). This part was not needed because for fans like me who have been longing for a book about this era of the band (which is actually my favorite), this conversation was almost insulting the KISS fans, by making fun of the lyrics of the band, like they were not quality songwriters or musicians. Granted some of the lyrics had cheesy, overtly sexual content which would not be accepted today, but at the time, that was what KISS wrote about, and dismissing it in a book where KISS fans would read it, seemed like all the other books and writers who goof on this era.

With that said, the book is very nicely done, including putting in excerpts from the Eric Carr book, discussing his death and his influence he had on others. This is a wonderfully historical writing, with humor and  respect (for the most part) of an era where many fans still hold dear to them. KISS fans, like Van Halen and even The Beatles’ followers, are passionate about which eras (and members) they like best, and for this fan, it is great to finally see a book covering the members Bruce Kulick, Eric Carr, Eric Singer, and the albums they contributed to, with  respect and not viewed as a joke. There are great tales of behind the scenes songwriting events, to the stage setups for the different tours, along with the history of the albums, singles, music videos, and long form videos. This is a book that must be added to the KISS library.