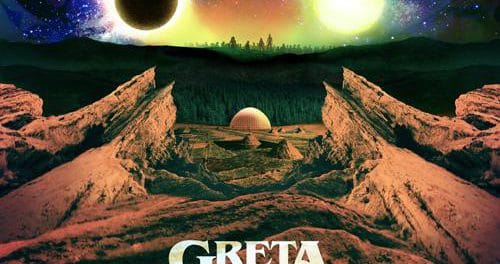 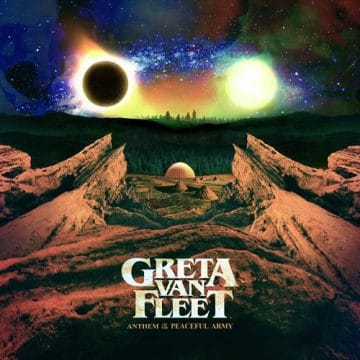 GRETA VAN FLEET
ANTHEM OF THE PEACEFUL ARMY
To be released on October 19, 2018 (Republic Records)

Greta Van Fleet are seemingly at the root of a possible rock n’ roll resurgence. While other bands struggle to sell albums and get people out to their concerts, the Michigan youngsters seem to sell out venues left and right throughout North America in record time. Greta Van Fleet‘s brand of Led Zeppelin rock n’ roll seems to be getting lapped up, which is a great thing. Considering that Led Zeppelin called it quits back in 1980, I think it’s time to accept that although Greta Van Fleet may sound a heck of a lot like Led Zeppelin, it has been almost 40 years since the pioneer group has released a new studio album. Accordingly, although Greta Van Fleet may sound like an excellent Led Zeppelin tribute band playing its own original material, I don’t really care about the Led Zeppelin similarities as long as the music holds up.

Anthem Of The Peaceful Army is a pretty good album but doesn’t justify the hype that Greta Van Fleet are receiving. That being said, I am glad that Greta Van Fleet are receiving so much press and adulation because good quality hard rock deserves to be at the forefront of the music world again and if Greta Van Fleet are the catalysts in that regard, so be it. While Greta Van Fleet‘s Black Smoke Rising and From The Fires EPs contained the standouts “Highway Tune” and “Safari Song”, Anthem Of The Peaceful Army does not boast such killer tracks. In fact, there are only a few songs on the record that are really memorable. “When The Curtain Falls” is the best track with an infectious guitar riff, a faster pace compared to the other songs on the album (which doesn’t say that much) and some vintage killer Robert Plantish vocals from Josh Kiszka. “Lover, Leaver {Taker, Believer)” is another faster paced rocker but seems a bit plain to me in terms of the variations throughout the song. “The New Day” is an enjoyable acoustic number with a cool guitar solo, an upbeat feel and some stellar singing from Josh Kiszka.

The rest of the songs on Anthem Of The Peaceful Army simply aren’t that great. The beginning and overall feel of “You’re The One” reminds me quite a bit of “Knockin’ On Heaven’s Door.” Most of the songs on Anthem Of The Peaceful Army are rather slow paced plodding type tracks such as the opener “Age Of Man,” “The Cold Win,” “Watching Over,” “Brave New World” and “Anthem.” Don’t get me wrong, none of those songs are awful by any means (well, perhaps “Anthem”) but at the same time, none seem to set the world on fire for me in any way. Perhaps my expectations were too high? I will say that Greta Van Fleet seem to have discovered what their musical identity is as there is a real identifiable sound to all of their songs. While others might think Led Zeppelin when hearing the songs on Anthem Of A Peaceful Army, I think Greta Van Fleet with Josh Kiszka‘s piercing vocals, the bombastic drumming from Daniel Wagner and Jacob Kiszka‘s identifiable guitar sound.

Is this the album of the year? Definitely not. Is this the rock n’ roll album that might sell the most copies this year? Perhaps. Will the Greta Van Fleet phenomenon continue? Time will tell. At the end of the day, I don’t hear anything that special on Anthem Of The Peaceful Army and if it wasn’t for the Greta Van Fleet hype, I probably wouldn’t pick up this album. However, I will say and concede that Greta Van Fleet seem to have come up with a real classic rock type album that can likely appeal to numerous people across many genres of music. Let me put it another way, I could picture hearing any of the songs off Anthem Of A Peaceful Army coming from the radio, a grocery store, the waiting area at a doctor’s office or an elevator.