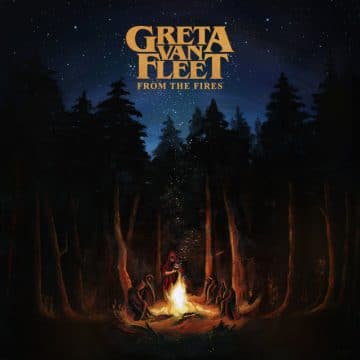 Perhaps the most incredible thing about Greta Van Fleet is that the band members are so close with three of them brothers (singer Josh, guitarist Jacob and bassist Samuel) along with “close family” friend and drummer Danny Wagner. One can only imagine how much time that the three brothers put in together rehearsing and refining their sound so although the band feels like an overnight sensation, the core band members have actually been together as a group for five years. Greta Van Fleet‘s songs have an unparalleled maturity to them, which sets the band apart from many of its contemporaries and is probably one of the key reasons why so many people are into them. The songs are rich and well crafted with a real ’70s flavour to them while still sounding fresh.

While it’s great that Greta Van Fleet have released this double EP, the reality is that four of the songs were released earlier this year under the Black Smoke Rising EP. Accordingly, if you already have that EP, you might not be that enthused with shelling out money to only get four new songs out of eight. That’s not an issue for me for this one but I gotta think that if I had bought Black Smoke Rising, I would be slightly annoyed at having those four songs repackaged with only four new ones that include two cover songs. I know that many bands seem to do that these days. For example, the now disbanded Last Call Messiahs included the four songs on their debut self-titled EP as part of their full-length debut album Sermons Of Debauchery two years later. Canadian rockers Dextress included three of their four songs from their initial The Demo EP on their recently released self-titled full-length album. The difference between those two bands and Greta Van Fleet is that the songs were re-recorded for the latter two’s subsequent releases while Greta Van Fleet have simply used the same recordings for the songs that appear on the Black Smoke Rising EP and the double EP From The Fires.

Greta Van Fleet‘s “new” double EP From The Fires kicks off with the Led Zeppelin-ish guitar riff for “Safari Song” which sets the stage very well for what you can expect from the band. By the time that lead vocalist Joshua Michael Kiszka starts singing, I feel this strong pull to listen to the entire track and see where the group is going to go. Having heard “Safari Song” more than 25 times now, I still feel that urge to listen to the entire track to see where the youngsters are going with it. Singer Joshua reminds me so much of Robert Plant. So much that I can picture Plant singing “Safari Song” with Jimmy Page handling the guitar on the song. The next track is one of two originals. “Edge Of Darkness” is a bit of a moodier rocker with singer Joshua‘s voice carrying the song. Interestingly, the Black Smoke Rising EP songs and the newly recorded ones are almost alternated back and forth. Although I like all the newly recorded songs, I have to say that the best tracks come from the Black Smoke Rising EP and the two weakest tracks are the two covers — “Change Is Gonna Come” and “Meet On The Ledge” — that the group tackles, which are the slowest of the bunch. The covers aren’t bad by any means but it would have been nice to hear more originals from the youngsters because the six originals that are on From The Fires range from good to exceptional.

The group’s signature song “Highway Tune” is simply a killer song which seems to incorporate the best of Led Zeppelin all in one song. It’s not surprising that the track seems to be getting re-recorded and/or re-released during the group’s short time thus far as I understand that “Highway Tune” first surfaced when the group had its original drummer Kyle Hauck in the band in 2012-13. “Talk On The Street” is about as straightforward rocker as Greta Van Fleet manage with the stupendous singing from Joshua Michael Kiszka. The former title track “Black Smoke Rising” once again showcases Joshua Michael Kiszka‘s fantastic vocals that carry the song once again. One thing that I noticed about Greta Van Fleet‘s songs is that they are so rich and mature that they don’t necessarily blow you away right away but give them a few listens and you’ll likely be pining to hear them again and again.

Rumours of a rock n’ roll resurgence seem more and more prevalent these days and Greta Van Fleet look poised and ready to lead and open the doors for this revival. Greta Van Fleet may not play sleaze type rock n’ roll but they do play quality timeless rock n’ roll and so damn it, another album to consider for the Sleaze Roxx’s Top Ten Albums of 2017. That top ten is getting awfully crowded this year.