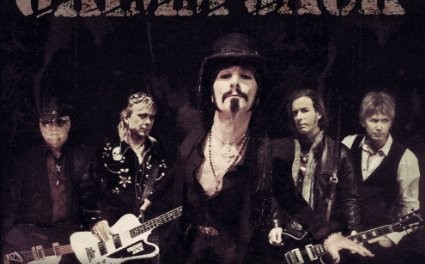 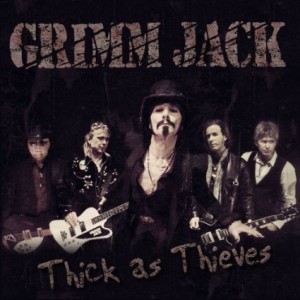 Review:
Grimm Jack‘s Thick As Thieves took me by surprise. I didn’t expect it to be so good. In fact, I totally underestimated Grimm Jack as I didn’t expect Thick As Thieves would grow on me so much and turn out to be such a great album. Knowing virtually nothing about Grimm Jack‘s history, what first struck me while listening to Thick As Thieves is how old school the album sounded in terms of riffs, varying tempos, melodies, sound and attitude with its tinge of southern rock. The group sounds so old school that the last song on the album — the aptly named “Last Call” — should have been on one of the first three KISS albums. I have not heard a band capture that classic old KISS song in a very long time. I don’t think that KISS could even recapture that sound these days!

Eventually, I figured out why Grimm Jack have such a fantastic retro old school feel to them. It’s because the New York based rockers have been around for a long time! Grimm Jack have actually been in existence for thirty years. I am not sure why these guys never made it onto my radar because their 1988 Partners In Crime EP was even featured in the Circus and Hit Parader magazines back in the day — two publications that I devoured from cover to cover during that time period. Inevitably, as what occurred to a number of quality sleaze rock bands, the changing musical landscape with grunge put a sad end to Grimm Jack or simply just had them fade away until they resurfaced about six years ago.

Grimm Jack‘s Thick As Thieves is a diverse and rocking collection of songs that includes the three tracks that were on the group’s 2012 EP Damned. While some people may scoff at having tracks re-appear on a subsequent release, if you have not yet picked up Damned, just be glad that all three tracks from that EP are included on Thick As Thieves because all three songs are just sooooo good! The KISS classic — I mean Grimm Jack‘s “Last Call” — will take you back to the ’70s in a heartbeat. Grimm Jack‘s cover of Neil Young‘s penned “Ohio” is so good and fits so nicely with the rest of the tracks on Thick As Thieves that you might think that Grimm Jack actually wrote the song themselves. “Damned” is just a raunchy rocker with a cool groove to it.

So what about the rest of the songs on Thick As Thieves? Well, in a nutshell, they really rock while providing some nice variety. The contrast between frontman Billy Kohout‘s raspy whisky soaked voice, the great guitar riffs and old school soloing, and the strong backbone rhythm section of drummer Dave Leeds and new bassist GG Zen-Garten make for some fun rock and roll. “Rotten To The Core — which is featured in a video — gets the party going very quickly and is just a fun rocking song. “Sex Drive” starts off with a cool riff before slowing down to a snail’s pace before kicking right back at an amazing fury with some nice harmonica touches from Kohout. After a little foreplay, “She Moves Me” pretty much explodes in your face. Certain portions of “Girl Like You” take me back to the glory days of Alice Cooper back in the ’70s. I could keep going song by song but I’ll stop there. You get the picture. I really like Grimm Jack‘s Thick As Thieves! The only track that I am not that crazy about is the country sounding ballad “Twilight” which really should have been left off the record.

Grimm Jack advertise themselves as playing “quality rock and roll.” It’s one thing to come up with a cool advertising gimmick and it’s another thing to be able to back it up. In the case of Grimm Jack, Thick As Thieves is the content that backs up the gimmick “quality rock and roll.” If you were to pick up only one album this year, you would be making an excellent choice in picking up Grimm Jack‘s Thick As Thieves.