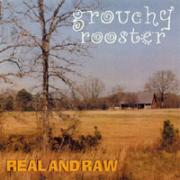 Review:
Grouchy Rooster is the side project of bluesy and gruff vocalist Gary Jeffries (known better for his work with Asphalt Ballet and Alligator Stew). Real And Raw is an appropriate title as these songs are raw jams laid down wherever a six-track recorder could be found. There is no fancy or glossy production, just a handful of talented musicians playing “real and raw” music.

Musically the group serves up moody country tinged rock, complete with steel guitar and harmonica. “Louisiana Man” is an Alligator Stew staple and about as heavy as Grouchy Rooster gets. “Far Beneath The Rubble” is a moving and heartfelt acoustic tribute to the ’94 Northridge, California earthquake victims while “Annie I See Your Eyes” has a similar feel and is dedicated to Gary‘s deceased stepsister. “You Gotta Give” has an up-beat bouncing rhythm and cool guitar effect on the solos. “Up On The D.L.” ends the disc on a rocking note and would have made for a great single.

Of course the selling point of Real And Raw is Gary Jeffries vocals, without a doubt one of rock’s great treasures. He can handle a touching ballad one minute and a full-throttle rocker the next. If you enjoy musicians laying it on the line, warts and all, then this album is for you. It can be purchased at cdbaby.com.