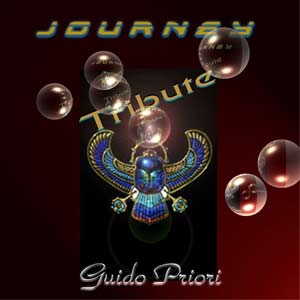 Review:
Usually tribute albums contain a handful of artists recording their interpretations of the originals, but in this case we have one man doing more plagiarizing than interpretation. So one has to wonder what the purpose of recording something so similar to the original recordings is. Is Italian Guido Priori paying tribute, or getting his name out there in case Journey is looking for a new front-man in the future? Well if it was up to me, I’d give him the job – as he nails it!

My personal Journey knowledge is limited to the radio hits (and the sight of Steve Perry shedding tears in that “Separate Ways” video), but from the moment I put this in the CD player I wondered if I was accidentally sent Journey‘s Greatest Hits by mistake. I can’t find any fault comparing the hits I know to the versions recorded by Guido, although his accent does poke through occasionally – which didn’t bother me at all. But I can’t give the vocalist all the credit here – the American session musicians Guido employed have obviously been weaned on Journey themselves.

I’m not sure how necessary this release is, but you have to admire a guy that loves a band so much (even going so far as to say his “life could not be the same without” Journey in the liner notes) that he is willing to stay so true to the originals, and at least he doesn’t butcher anything – which is all too common on tribute albums. Journey fans should be impressed with the exceptional execution and musicianship shown here, but a casual fan might be better off getting an actual greatest hits album – or would they? This is an interesting case of one fan recording for people exactly like himself, and for the record he had me singing along in places. Guido Priori‘s website can be found at gpriorijourneytribute.homestead.com.