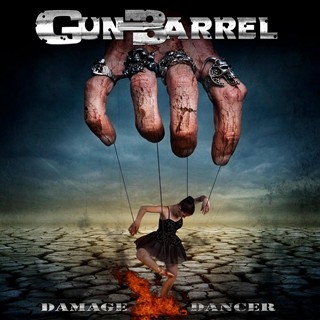 Review:
Damage Dancing? That could have been a name for moshing that didn’t catch on — but it’s still a really cool title for an album and song.

Yet another example of the superior musical talent overseas, Gun Barrel formed in Germany back in 1998 and have had some minor success in their home country, but not much overseas (our loss). While this group is not a typical power/progressive metal band, they do demonstrate that ability as they blend the power and skill with the raw sound of sleaze rock. Picture combining Guns N’ Roses with classic Judas Priest — an interesting combination indeed!

Once you pop this CD into the player, you’re repeatedly punched in the face with raw power from songs like “Damage Dancer”, “Bashing Thru”, “Judgement Day”, and others. Although Gun Barrel is a blend of power-metal and sleaze, both sides of the spectrum are on display during certain songs. For example, “Building A Monster” is a true power-metal masterpiece while “Heading For Disaster” is a loud and proud sleazy rock song.

The music, the vocals, and the rhythm all rock throughout Damage Dancer. New singer Patrick Suhl has a voice that resembles a smooth Ronnie James Dio with some Neil Young and David Coverdale influences — and it has lots of power too. Rolf Tanzius is a skilled guitarist, something that shows throughout the songs, in both the solos and the rhythms. The rhythm section of bassist Tomcat Kintgen and drummer Toni Pinciroli is also rock solid. There are no flashy frills on this album — just good, pure rock and metal!

Damage Dancer is also extremely well produced, capturing the band’s very raw live feel — so if you see Gun Barrel in concert they will sound exactly like this. Hat’s off to the band and producer on this one! Sometimes you get albums that don’t do the band any favors because they don’t sound good, and therefore, you don’t care to see them live — Damage Dancer is not one of those.

Damage Dancer has such a wide variety of styles it is hard to classify. But if you’re like me and enjoy Guns N’ Roses as much as Savatage, you’ll like this album. So, pick it up — in fact, buy everything you read about on Sleaze Roxx!

Reviewed by William Telltale for Sleaze Roxx, May 2014