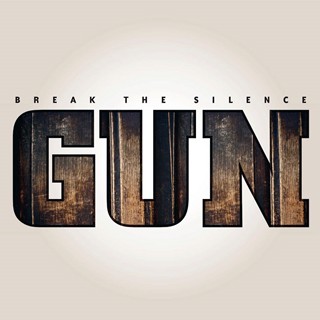 Review:
I suppose the first thing that makes Gun stand out is the fact that they resemble a group of men you’ve rounded up on a Sunday night outside the local chippy. Pasty-looking and just slightly gormless, maybe it’s just the way they’re gazing at the camera like goldfish looking out of a bowl. Fortunately the Scottish gents have more talent than the men outside my chip-shop or goldfish, and the fact that they’ve been around since the ’80s suggests a firm fan-base and at least some level of competence.

The band’s latest album, Break The Silence, combines easy-listening laidback rock with a slight vintage feel which I really like. Production wise, I think the album could have done with more bass — for example, the vocals on “Butcher Man” are a bit tinny and the overall sound is too treble to really get past the very outer edge of light rock. While the songs are light-hearted and keep you going, the guitar work really is very simple and the melodies are so colorless that you feel you’re going to flat-line by the time you reach “Lost & Found”.

The title track is by far one of the strongest songs here — it’s a bit pop-tastic for me, but it’s catchy and doesn’t drill incessant riffs and bass lines into your ears. Instead it shares the vocals and instruments out well and is definitely a happy-go-lucky song. You almost hear a darker side of Gun during “How Many Roads”, but the wishy-washy backing vocals are still ‘aahhing’ in the background, seemingly from the very beginning of the album. It’s around here that you notice this consistent dragging out of rhythm, enhanced by rubato by frontman Dante Gizzi that creates a real sense of never-ending… and it’s not a good one. “Running Out Of Time” is better, exploring Gizzi‘s range, but that certain spark is still absent while “Last Train” is a strong finish with attitude and confidence.

There’s nothing overly terrible about the music on Break The Silence, it’s just not exciting. If you want something with a real punch you might want to look elsewhere, as this is just a little bit lifeless.