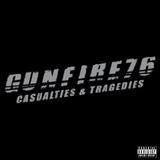 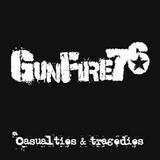 Review:
If you’re a Wednesday 13 fan, or if you’ve always liked his music but were turned off by the campy horror themed lyrics, then Gunfire 76 is the band for you. Gunfire 76 is Wednesday 13 stripped down, musically things aren’t much different, but with this band he is no longer backed into a predictable corner.

It’s difficult to review albums like Casualties & Tragedies, because if you’ve heard a Wednesday 13 CD you pretty much know what to expect. This disc may have increased the sleaze factor from his previous works, but aside for the lyrics it isn’t that much of a departure. If anything he is sounding more like Alice Cooper than ever, it’s especially noticeable on “Something For The Suffering”.

The best tracks on this album though are when Wednesday 13 kicks things into overdrive. The title track, “One More Reason To Hate You” and “What Did You Expect” perfectly blend sleaze with a punk-rock attitude. The horror-Goth legend even comes close to attempting a ballad with “Get Me Through The Night”, and does a pretty decent job with it. The disc’s shining moment though isn’t a peddle-to-the-metal rocker, instead it is an honest and heartfelt rock song entitled “Los Angel-less”. I’m guessing that a song like this is the exact reason Gunfire 76 was formed, lyrically it would never have fit on Wednesday 13‘s previous ventures.

To me Gunfire 76 represents Wednesday 13‘s attempt at becoming a legitimate musician. That’s not to say his earlier works didn’t impress, but you just know their were critics out there that would never take someone who wrote songs such as “Look What The Bats Dragged In” and “Happily Ever Cadaver” seriously. It’s a shame that Wednesday 13‘s career became so creatively stifling that he had to form a new band. But we can’t complain, because once again he has delivered a gem.