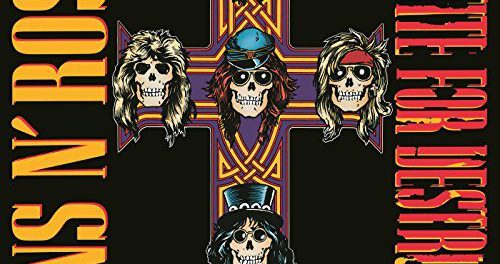 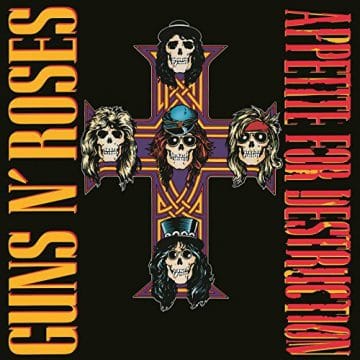 Review:
It’s been 31 years since Guns N’ Roses released their landmark album Appetite For Destruction. The album has gone on to become one of the more revered rock ‘n’ roll records of all-time, with ‘hits’ like “Welcome To The Jungle,” “Paradise City,” and “Sweet Child O’Mine” and killer deep cuts like “My Michelle,” “Mr. Brownstone,” “Rocket Queen,” “It’s So Easy,” “Nightrain,” and “You’re Crazy.” Looking back at this expanded two CD ‘reloaded’ deluxe edition has me reflecting on just how great of a record this is and how well the songs have stood the test of time. Though, I must admit, if I never hear “Sweet Child” ever again, I’d consider it a blessing. It’s the only ‘wimpy’ moment on this otherwise thunderous, ear splitting affair.

The remastered ‘reloaded’ (2 CD) deluxe edition has been brilliantly tweaked but not been made a victim of the volume wars. The crew that handled this package really took the time and care to do it right and not wreck this edgy and dangerousness of this gritty, sonically bombastic classic. On disc one, you get the original album remastered and on disc two, you get a collection of ‘highlights’ from the massive boxset that will be issued on June 29th. The second disc includes GN’R Lies which features; “Reckless Life,” “Nice Boys” (Rose Tattoo cover), “Move To The City,” “Mama Kin” (Aerosmith cover), “You’re Crazy,” “Patience,” and “Used To Love Her.” Noticeably missing is “One In A Million” which would have gone on to become one of the countless Guns N’ Roses ‘throwaway’ tracks had it not made news and become one of the many controversial moments of this band’s career.

The remainder of the B-Sides N’ EPs is a compilation of a Guns N’ Roses‘ import EP [until this point only vinyl] and some tracks from their ‘86 Sound City sessions. A huge deal has been made regarding the ‘new’ track that was unearthed by Guns N’ Roses — “Shadow Of Your Love.” I’m sure some of you have heard this song before in demo form via The Deadline Music album of Hollywood Rose demos that was issued a number of years ago or on the Guns N’ Roses import EP. The Deadline Music Hollywood Rose album also featured a demo version “Reckless Life” that can be found here in live form by GN’R. “Shadow Of Your Love” as previously mentioned, was featured on the import vinyl only EP with ‘canned’ audience noise to give us the ‘illusion’ that it was a ‘live’ recording. There’s two versions of “Shadow Of Your Love” which appears to be the same recording sans the crowd noise, until the tail end of the track where you can hear some of the crowd noise makes its way onto your speakers.

The real highlights of the B-Sides N’ EPs disc are the Sound City tracks which are really for the diehards who get a glimpse on the early origins of “Welcome To The Jungle,” “You’re Crazy,” “Nightrain,” “My Michelle” and “Paradise City” all performed at a slightly slower pace and an acoustic version of “Move To The City” which is an interesting surprise. All in all, this a great package to consolidate your previous copies of Appetite and GN’R Lies into one set with some extra goodies. I can’t see myself cruising down the road regularly blasting the Sound City renditions of these beloved tracks, but it will be cool to listen back to them every now and again. This is a glorious and sad time. Guns N’ Roses were such a fantastic band that became so over indulgent and are now a shell of what they once were. These five guys were untouchable at their peak. They crashed and they burned, but what a hell of a great ride it was from 1987-1989. At least we have this two disc collection to remind us of the band’s greatness.

Move To The City (1988 Acoustic Version)

Provided to YouTube by Universal Music GroupMove To The City (1988 Acoustic Version) · Guns N’ RosesMove To The City℗ 2018 UMG Recordings, Inc.Released on: 2…