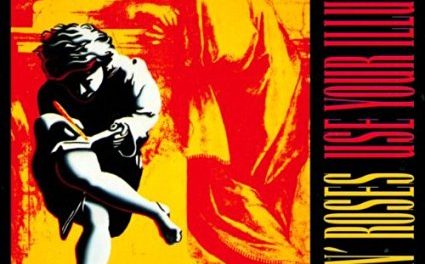 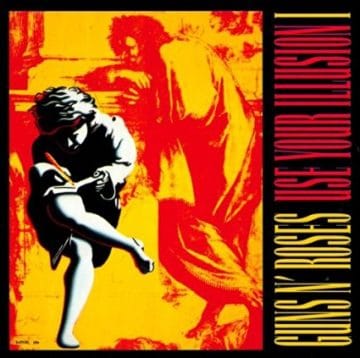 Review:
Today is the 25th year anniversary of the release of Guns N’ Roses‘ Use Your Illusion I and II albums so it is only fitting that Sleaze Roxx reviews these two iconic records. Since I first listened to Use Your Illusion II, I also reviewed that one first so you may be interested in starting from that one and getting the background feel / intro from that review before diving into this review of Use Your Illusion I.

Just like Use Your Illusion II, Use Your Illusion I started off strong with the one, two punch of “Right Next Door To Hell” and “Dust N’ Bones.” These two tracks were some of the faster rockers included on either Use Your Illusion album except that they featured keyboards and/or piano, which while tastefully done certainly took away from the sleaziness and raunchiness exhibited on Appetite For Destruction. In any case, you had two solid tracks to kick things off. I have never been a fan of the song “Live And Let Die” and still scratch my head as to why Axl Rose and the boys covered this Wings song and even more why they continue to play it live! Nevertheless, I can appreciate that some people might really like the song. While there is no question that “Don’t Cry” is a well crafted song, I have always felt that the song is a bit on the dull side. “Perfect Crime” saw Guns N’ Roses turning up the volume with Axl singing at what still seemed like a hundred miles a minute. While not a bad song, this track would have likely never made the cut on Appetite For Destruction. The first dud on Use Your Illusion I appeared in the form of “You Ain’t The First” — a song better suited as an obscure “B” side track than front and center in the first half of any album. “Bad Obsession” started off with a cool groove before arguably too many instruments hindered the song. “Back Off Bitch” could have easily found itself on Appetite For Destruction and was a welcome rocking addition. It would have been nice if Guns N’ Roses played this one live on their Not In This Lifetime Tour reunion.

“Double Talkin’ Jive” could have been so much better and might have been the start of Axl Rose‘s downward path into, and a precursor to, the industrial tinged rockers that can be found on Chinese Democracy. The song did have a cool Quentin Tarantino like eeriness to it which made it an interesting track nonetheless. The masterpiece on Use Your Illusion I was of course “November Rain” and one listen to it will explain why Axl Rose apparently devoted most of his energies towards that song over the others. It’s epic. It’s grand. It’s got a kick ass solo. I will always picture Slash ripping his guitar solo while standing on top of the baby grand piano that Axl played. Stellar song — enough said! “The Garden” started off a bit weird but ended up as one of the highlights with none other than Alice Cooper providing his very recognizable voice in an awesome cameo.

Use Your Illusion I should have stopped there. The rest of the tracks bordered on below average to terrible. This is the reason why Use Your Illusion I has never really appealed to me because it ended on such a poor note of subpar track one after the other. “Garden Of Eden” was simply sped through at lightning speed sacrificing melody for hundred miles a minute singing by Axl. The song still just feels like it’s on the wrong speed like when you put on a record on a turntable but at the wrong speed — I might be dating myself here. “Don’t Damn Me” was an uninspired rocker with a pretty good melody at times but pretty damn boring for the most part with Axl Rose seemingly talking rather than singing most of the verses. “Bad Apples” was another filler track that had no business being on the album and which totally lacked melody compared to just about any other Guns N’ Roses‘ track up to that time. The chorus portion of “Bad Apples” with the piano is still pretty cool but the rest is forgettable. I am surprised that “Dead Horse” got a video for it because it is another dull track. The ten minute plus “Coma” was an example of Guns N’ Roses stretching their wings way too much and aimlessly at that. There is not much to say except the track “Coma” still puts me in a bored coma like state when listening to it.

Overall, half of the songs on Use Your Illusion I should have likely not made the cut. One can only imagine how good that Guns N’ Roses‘ follow up to Appetite For Destruction would have been had the group took the best of both Use Your Illusion albums and combined them into one stellar album. Unfortunately, cockiness (“we have so many great songs”) and definitely monetary greed (two albums rather than one) seem to have been the main motivators, which explains the two Use Your Illusion albums with material ranging from brilliant (with luckily more on that end) to simply terrible.