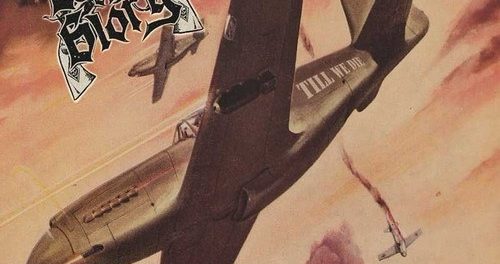 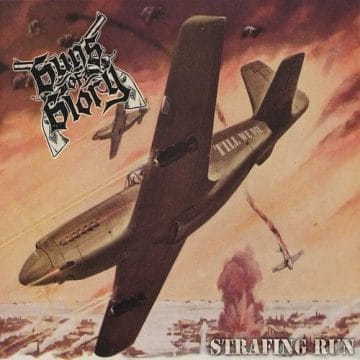 Review:
I would love to say that Finland’s Guns Of Glory is releasing their debut album, because I have not been aware of them previously. Strafing Run is actually their second full-length release, behind 2013’s On The Way To Sin City and a 2011 demo.  Of their first record, Sleaze Roxx stated “There isn’t a bad song on On The Way To Sin City, and even though the album is nine songs in length, it practically flies by. If these guys slipped past you earlier in 2013, do yourself a favor and correct that error because this release is top notch — right down to the professional artwork on the cover and within the booklet itself. Guns Of Glory are great… and definitely headed for glory among fans of unrelenting sleaze.”

This time, Strafing Run takes 50 minutes to work through a solid 12 song line-up. I’ve listened to the album now maybe a dozen times, and what first struck me as filler now has some cachet to it. Sure, there are weaker tunes, but most records do. “One You Need” is growing on me, but doesn’t seem to work within the context of the rest of the album’s sleaze. Even “Devil In Me” has the same feel… more like alt-college rock radio friendly tracks. They’re listenable, but stand out as different from the other ten tracks.

The first single “Running From You” does a pretty good job of defining Guns Of Glory. The band is not quite the obvious Airbourne rip-off, because they work at different speeds and tempos than Airbourne. However, I’ll grant that “Running From You” has that same feel to it. Strafing Run does go deeper though. “Keep Your Jack” is an interesting song with a few things going for it — an intricate set of dual guitars, unexpected chord changes, and a gritty vocal.

Speaking of vocals, singer Petri Puheloinen pulls off a pretty good Lemmy impression on “I Don’t Get It.” “Till We Die” is another nod to Motörhead, and Lemmy’s singing style. It has a power metal groove but a party atmosphere to it. One song with pure sleaze is “Move Aside.” It may not be ’80s sounding, but it’s got that dirty, grimy sound. Interesting that across the entire album, the guitars have avoided an over-the-top distortion sound in favour of a purely organic fuzz. Subtle but effective. “Days On The Chain Gang” and “Lay Down” opt for a bluesy, slower, and I suppose introverted delivery.

The more I listen to Strafing Run, the more appealing it gets. The guitar work is excellent, and the back end is just loose enough to make each song sound like a one-off jam rather than a multi-take labour it likely was. Guns Of Glory is worth discovering if you haven’t already.

Guns Of Glory‘s “Running From You” song: