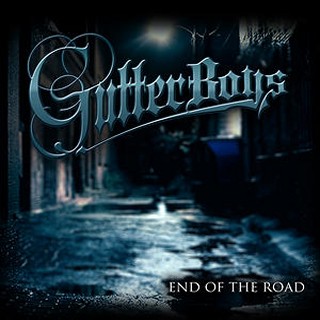 Review:
In the late ’80s and early ’90s several hard rock/hair metal bands were unmercifully swallowed up by that nasty grunge fad. In between the flannel shirts and baggy jeans, bands like Tyketto, Electric Angels and XYZ struggled for their place among the Nirvanas and Pearl Jams of the music world.

During that period a band on the rise from Hollywood were doing the complete opposite of everything that Seattle was producing — the band were called Gutterboys. Unfortunately, Gutterboys didn’t have the Sunset Strip opportunities like so many before them, and with the climate of music changing by the mid ’90s the band decided to call it quits. Fast forward almost 20 years, to 2012, with so many of their Sunset Strip contemporaries once again thriving and their original line-up intact, Gutterboys were back. In the next several months the band shared the stage with the likes of Tuff, Love/Hate, White Lie, L.A. Guns and several others. Now almost a year after their reunion, Gutterboys have finally released their debut CD End Of The Road… and it was well worth the wait.

The opening track “Don’t Call It Love” is a raunchy thumper that throws us back to the classic hair-metal days of sex in cars, video tape and threesomes. By the fourth song, the TNT-esque title track, we know exactly what Gutterboys are serving — no bullshit, in your face tunes dripping with melody, big choruses and flashy/ballsy guitars. Sandwiched in between these slices of sleaze supremacy is the soft and warm “Baby” and the call to cellphone waving… uh, I mean lighter waving, “Another Try” — a slow flowing tale of regret and lost love that sits well in between hair metal classics like “I Remember You”, “Forever” and “Heaven”. There’s no shortage of versatility with the revved up, bluesy “Lover Boy” to the Randy Rhoads minded “Dee” through to the album’s closer “Living Doll”, from its finger snapping, jazzy intro building to a classic homage to Van Halen‘s “Beautiful Girls”.

Heavily influenced by the classic hair metal icons before them, Gutterboys have made it through a long journey to get here. With so many classic bands trying to reinvent themselves, Gutterboys stay true to their roots and deliver — End Of The Road is well worth your time.