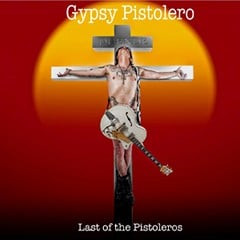 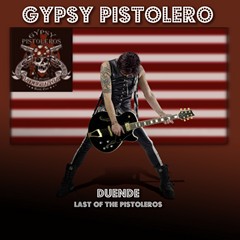 Review:
When Gypsy Pistoleros burst upon the scene in 2007 with Wild, Beautiful, Damned they brought a uniqueness to the world of hard rock that is rarely found — by mixing sleaze with flamenco sounds the band was both impressive and fresh. Unfortunately they never seemed able to build upon that initial hype and struggled with record companies, revolving band members and any other problem a group can face. Rising from the ashes is frontman Lee Pistolero, who is forging ahead on his own as ‘the last of the Pistoleros’.

You might expect Lee to be angrier and more pissed off than ever, and deservedly so, but that doesn’t seem to be the case. Instead the grizzled veteran has opened himself up to the world, at times showing a vulnerability that wasn’t found on his earlier works. In keeping with Gypsy Pistoleros‘ over-the-top flamenco metal we have “Welcome To the Hotel De La Muertos” where Lee screams for all he is worth, “Rubi’s Got A Gun” which builds speed as it progresses, the throbbing “Jezebel” and the commercially infectious “Livin’ Down With The Gypsies”.

On the other end of the spectrum we have Lee essentially sitting down with an acoustic guitar and drifting into Dogs D’amour territory. “They Call Me De Django” is the first of these, followed by “Los Suenos Del Los Muertos” and then best of the bunch “Sangra De Las Rosas” — an eight-plus minute epic that may be the most ambitious track released under the Gypsy Pistoleros moniker. The only song that falls flat and seems out of place is the first single (it’s amazing how that works) “Stand & Deliver”, a cover of the Adam And The Ants hit that I have to say is horrible.

Upstart label 100% Rock has released Duende – Last Of The Pistoleros in Australia with three live demo bonus tracks that won’t be found on the North American release — one being “Sonic Reducer”, a killer hard rock track that is worth the price of admission alone. Duende – Last Of The Pistoleros finds Gypsy Pistoleros, or should I say Lee Pistolero, maturing while staying true to the magic they originally possessed. A photo in the CD booklet of Lee facing away from the camera with a guitar strung low and drifting off into the sunset creates the feeling that this album will in fact be the ‘last of the Pistoleros’, and if that happens they will go out on top.