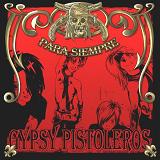 Review:
Just when you thought you’ve heard it all before, around comes a band from Espangland (as they call it), and shakes things up. While many bands try to capture the arena-sound of the 80s, these guys are firmly rooted in dirty rock’n’roll, which Moot The Hoople or early Hanoi Rocks used to play. What makes Gypsy Pistoleros a big exception against any other current revival band I’ve ever heard is the Flamenco touch, which is mixed in for good measure. Sounds strange? Well actually, it is a strange mixture, but it works really fine.

Ay caramba, just listen to the opener “Shotgun Kiss Is Ay Que Dolor” and you will very likely find yourself tapping along. “Un Hombre Sin Rostro, Pistolero” is a rocker a la early Aerosmith, mainly sung in Spanish. Yes, that’s right, the mixture is not only on an instrumental basis, but in the lyrics as well. Again, this works perfectly. I for one hardly understand anything and still I found myself humming along to songs like “Jet, Jet, Jet Boyz”, the semi-ballad “Moonchild” and their energetic cover of Ricky Martin‘s hit “Livin’ La Vida Loco”.

Gypsy Pistoleros are, simply put, unique! Overall they deliver a fun and very good debut album, which with ‘Lady Luck’ on their side could put them into the charts all around the world, because it’s got the exotic-touch it sometimes needs to succeed. But their style could also turn out to be a problem – I really enjoy Para Siempre, but what comes next? I’m not sure whether, with the element of surprise gone, another album would be as much fun as this one is. They need to be careful with the follow-up or they are gone faster than Speedy Gonzalez. I hope not, as Gypsy Pistoleros is a very promising band!