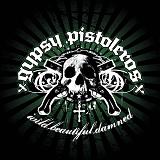 Review:
Upstart label Evil Boy Records has just released their initial CDs, and in the case of Gypsy Pistoleros I can only say that they managed to sign one of the most unique bands I’ve heard in years – sleaze rock meets Spanish flamenco music in a refreshing blast of originality. Listening to Wild, Beautiful, Damned I immediately picture the band playing in the background of Quentin Tarantino‘s slash-fest From Dusk Till Dawn. Gypsy Pistoleros could easily have been the banditos strumming severed limbs while Salma Hayek gyrated across the stage.

Don’t ask me what the hell these guys are singing about, because half the time I have no clue, nor do I care. The music rocks and that is the most important thing. Right from the beginning of “The Crazy Loco Loquito” you can tell that Gypsy Pistoleros is on to something special, and it just gets better from there.

“Un Hombre Sin Rostro, Pistolero” is one of the best songs I’ve heard so far this year. Complete with trumpets, the song evolves into a screaming energy filled chorus. “Una Para Todo Es Bandido” starts off nice and slow, but it doesn’t take long for that to change and once again the chorus is over-the-top. It is that same change of tempo that makes “What’s It Like To Be A Girl In The House Of 1000 Dolls” work so well, as it is one of the few songs that abandons the flamenco sound (“Switchblade Kiss Comes Close” and “Jet, Jet, Jet Boyz” being the others). The band even throws in a nice ballad called “Moonchild” for good measure.

Gypsy Pistoleros is blazing a new trail here and doing a hell of a job. There isn’t a song on this release that I didn’t like, right from start to finish the boys offer a steady dose of sleaze with a twist. The liner notes call Wild, Beautiful, Damned the “greatest renegade gypsy flamenco sleaze glam rock n roll album ever” – who am I to argue?