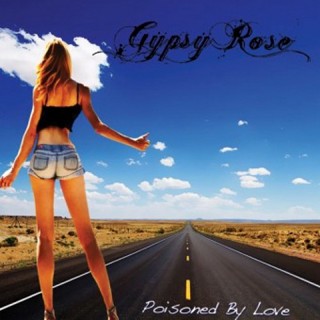 Review:
In the late ’80s Gene Simmons proved there was more to the famed bassist than face-paint and spewing blood when he founded Simmons Records. Of course, like the majority of The Demon’s business ventures outside of KISS, the label wasn’t very successful but it did manage to release four albums before sinking — one of them being Gypsy Rose‘s Prey. My personal favorite from the sparse Simmons Records catalogue, Prey was one of those albums that hit the shelves a little too late, and resulted in Gypsy Rose becoming a ‘one and done’ band… that is, until now.

For those that remember Gypsy Rose it is probably due to the hard-hitting “Poisoned By Love” single — the song that originally caught Gene Simmons‘ attention. On this collection of the same name that signature song appears twice, but in much mellower versions. The better of the two is the acoustic ‘Canada mix’, which finds vocalist Michael Ross sounding absolutely incredible and conjures up images of early Asphalt Ballet. The only other song from the Prey album to appear here is the personal ballad “Don’t Turn Your Back On Me Now” which sounds fuller and much better this time around — once again during the ‘Canada mix’ version.

From there Poisoned By Love is a mixed bag, mostly because of the subpar sound quality on some of the long lost recordings. Some of the better efforts are “Too Many Pieces”, “Chase That Dragon”, “Touch” (a song that has a huge chorus in the same vein as “Poisoned By Love” and some cool slide-guitar work), the party-driven “Give It To Me All Night Long”, and the heavy “Bang Bang Boys”. A couple Michael Ross solo tracks are added at the end for good measure with the singer sounding especially vulnerable during “Is Your Love Gone”, one of the album’s strongest compositions.

One thing that has me puzzled is the liner notes. Ross references songs recorded with Steelheart‘s Miljenko Matijevic, yet the song titles referred to don’t appear on the track listing. Did the names of a couple songs get mixed up or were there some last minute legalities that led to them being left off the disc?

As mentioned earlier, the only thing that hurts this album is the sound quality. If Gypsy Rose would have been given the opportunity to record some of these tracks with a professional producer back in the early ’90s they would have had another satisfying album on their hands. But it’s easy to look past the suspect quality that sometimes rears its ugly head on Poisoned By Love and concentrate on the songs themselves because there are only a couple stinkers on the entire album. Hopefully this disc results in a reunion of sorts, and even better yet… more music from these underrated Canadian rockers!