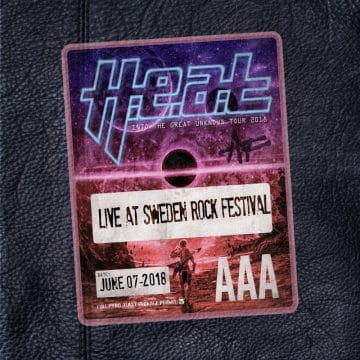 Review:
It appears that H.E.A.T are taking their cues from Iron Maiden. Release a studio album and follow it up with a live album. Release another studio album and follow it up with another live album. Since the release of Brave New World in 2000, Iron Maiden have released a new live album after each studio record. Yes, technically, Maiden‘s live record Flight 666 (2009) wasn’t exactly a continuation of the studio effort A Matter of Life And Death (2006) but it was nevertheless another live album after a studio record. I eventually stopped buying Iron Maiden‘s live albums but only stopped with the last one The Book of Souls: Live Chapter. The point being that I will be purchasing H.E.A.T‘s various live releases for a while yet before eventually tapping out.

There are only 13 songs on Live At Sweden Rock Festival — which is understandable given that the band is playing a rock festival — and four originate from Into The Great Unknown (2017), five from Tearing Down The Walls (2014), two from Address The Nation (2012), one from Freedom Rock (2010) and one from H.E.A.T (2008). In contrast, Live In London, which has 15 songs, has seven emanating from Tearing Down The Walls (2014), six from Address The Nation (2012), one from H.E.A.T (2008) and the single “1000 Miles” (2009). Taking into account that H.E.A.T‘s two best studio albums by far are Address The Nation and Tearing Down The Walls, Live In London is a stellar release since 13 of the 15 songs come from those two albums. Live At Sweden Rock Festival on the other hand covers more ground and includes all five of H.E.A.T‘s studio releases and unfortunately, four songs from Into The Great Unknown. Even worse, arguably the best or second best track from Into The Great Unknown — “Best of The Broken” — is not even on Live At Sweden Rock Festival. How could that be? Even the stellar “Point of No Return” from Tearing Down The Walls is sadly missing from H.E.A.T‘s setlist at the 2018 edition of the Sweden Rock Festival.

If anything, H.E.A.T show on Live At Sweden Rock Festival that they don’t yet have the depth of songs to really deviate too much from their greatest songs in a live setlist. In a way, it’s kind of like Iron Maiden when they started releasing one live album after every studio album. Rock In Rio was awesome became Brave New World was a great studio album. The live album Death On The Road wasn’t quite as good as Rock In Rio since the material on Dance of Death didn’t quite measure up to Brave New World. And obviously, I haven’t listened to Maiden‘s live record En Vivo! since shortly after purchasing it as it leans heavily on material from arguably, one of the band’s worst studio albums — The Final Frontier.

Overall, while Live At Sweden Rock Festival displays H.E.A.T‘s trademark high levels of live energy and singer Erik Grönwall‘s almost hyperactive nature, the material just isn’t as good as on Live In London. I have a couple of other pet peeves. Grönwall‘s lengthy address to the crowd — presumably in the Swedish language — mid-way through the live set is painful to listen to since I can’t understand a thing! In addition, although I thought that I was purchasing a live CD/DVD, I ended up receiving a live CD/Blu-Ray. Since I don’t have a Blu-Ray player, it really feels like I am not taking full advantage of this release as the Blu-Ray includes the live performance as well as eight bonus videos. While I am not unhappy to have purchased Live At Sweden Rock Festival, I suspect that it will be gathering dust for many years to come.