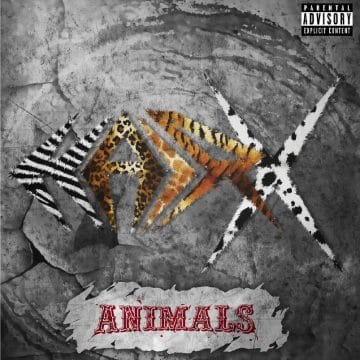 Review:
Another new band, another solid album… I wish that all the hard rock and heavy metal fans of the ’80s that pine to hear more would give these new bands like HairX a chance because there’s still lots of great music being made to hear but you admittedly have to dig a little deeper to find it now that it’s not on mainstream radio like back in the ’80s glory days.

HairX offer ’80s style hard rock with a twist — the twist being a presumably Eastern European singer with some slightly Slovenian accented English. If you enjoy Miha “Polo” Polanc‘s singing, odds are that you’ll really like HairX‘s entire album Animals given that the music and melodies are quite good. I for one do like Polanc‘s singing and have always enjoyed some slightly accented English singing so do enjoy the Animals album. Polanc‘s voice is so distinctive and dominating at times that I think it will be a love or hate thing with the album for most.

Perhaps the most interesting track is “DTG (Dedicated To Girls)” simply because it appears that Polanc is singing in his presumably native Slovenian language. I find that his vocals on that song feel more natural than on the rest of the tracks where he is singing in English. Unlike perhaps others, I actually enjoy good hard rock and/or heavy metal music even if the singing is not in English with case in point being my review of Polish group IRA‘s 1993 Rok album last year. The one knock I have with Animals is that there does not appear to be any real standout songs. Every song is a good one but none would qualify as great to my ears. That being said, my favorites are the opening track “Call Of The Wild,” “Rebel” and “D.T.G. (Dedicated To Girls).”

It might seem a bit odd to end my review talking about a band’s logo but that’s what I am going to do. HairX sent their Animals CD to Sleaze Roxx (thank you!) for review some time ago. I started listening to the album but misplaced it for a little while, or more like a long time (sorry!). By the time I found it, I couldn’t remember the name of the group and couldn’t make out what was the band’s name from the logo on the album cover. I thought that it likely started with a “C” and eventually did a search of the singer’s name on Facebook to ascertain the group’s name. To my surprise, it was HairX! Now that I recalled the band’s name again, of course I could see that the logo was for HairX but it wasn’t apparent at all when I couldn’t remember the group’s name. In my humble opinion, the logo might need a little work so that people can easily identify who they are listening to.