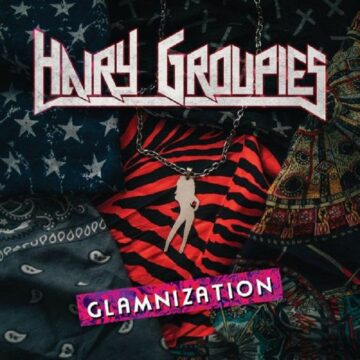 Review:
It is certainly no secret to anyone within these hallowed halls that reads the ramblings of my addled mind, that I tend to steer clear of negativity in my reviews. I see no value in bringing down a band just for clicks and giggles, but more importantly, I gravitate towards bands that (1) tickle me and (2) that need a little leg up, that might appreciate the coverage and my words. In actuality, that appreciation goes two ways as I want the band(s) to get that attention that they deserve and in turn (fingers crossed) a few willing open minded readers will take a chance on something other than an already well established band. That being said, I am quite pleased to introduce to you the creative stylings of Czech Republic’s Hairy Groupies. This talented four-piece offers its sophomore long play release entitled Glamnization.

At first glance you’d assume based on the band name, album title and album photo that they may be all flash and no splash, a Steel Panther-esque novelty act and that would be why we don’t (or shouldn’t) judge a book by its cover as Hairy Groupies are far, far removed from anything considered a novelty. While we are on that tangent, I would consider them more of a hard rock / melodic hard rock band more akin to say a modern day Warlock or a more current reference in line with Halestorm. What? How’s this? Yes, another misnomer from the first impression would be that Hairy Groupies are all men. Sorry, not really, as Jackie Daniel’s (could be a boy’s name in a glam band I reckon) is an angel, not a guy and that voice, good night — if you’re not moved by it, then you’re hopeless.

To avoid another cliché and not do a track by track review, I will surmise for you that this album has a little bit of everything, from epic ballads, arena rock anthems, hard rockers and even a track or two that dabbles in an ’80s LA Sunset Strip like “glam” hard rock. It is not hard to hear these ’80s influences in a lot of the compositions, but the vocals and various musical subtleties modernize the entire production.

OK, well I lied. The lead off track, “The Story” is an up-tempo hard rocker that reminds me of Masi‘s “God Promised Paradise”, in the lead off lick, but with Lzzy Hale providing the vocals, making a nice hard rock “modern” feel. This one is very infectious, with a huge drum sound, slamming solo and the outro is quite nice. The lead off video / single is next. “Illusory Man” is a more MAOR number, with a huge chorus, layered with Jackie‘s angelic vocals. The verse has a nifty layered vocal with the guitar following along. I see why they this one is the lead off single as it does set a nice balance for the album. “Everybody” is another text book example of a hard rocker with a twist in post solo bridge where we are treated to just piano and Jackie‘s voice, and it fits very well. “You’re Not A Reason” is what can be only described as the band’s homage to Dokken‘s “The Hunter” (in the intro and first verse), then it shifts gears into a more Vixen-esque rocker. This and the previous track certainly shows how good a drummer Rücky Sqüeel is as there are a few nice accelerated and off meter techniques displayed. The former song’s key changed outro is very period perfect as is the effects ladened vocals.

“Hold Me” is a power ballad akin to Guns N’ Roses‘s “November Rain” or any piano, orchestral layered, cigarette lighter, arena ballad. The ‘whoa oh whoa’s’ are a nice example of song writing for crowd participation and Jackie‘s voice soars in this one, gets REAL high and is quite powerful. “Cry Baby” starts with a flanged guitar intro that rocks and then in the verse, it drops out for a “White Wedding” vibed verse before coming back in and we then go into a catchy chorus featuring a super cool guitar walk bridging that is as impressive as it is effective. Very easy to see why this is (assumed) the second single and it reminds me a lot of the harder edged offerings from Pat Benetar. “So Alive” has another of those George Lynch like rhythm licks with a good smattering of Wolf Hoffmann (“Midnite Mover”) making for a music geek’s euphoria and the chorus is another ear worm. The pre-solo bridge is a very effective progression into a shredding solo that certainly showcases what has been prevalent through the album so far — Denny Roth has skills for days and in another world, all the kids would be talking up his skillset.

“Shiver Down My Spine” keeps the theme alive with a hard rocking verse, huge soaring chorus and some almost double bass work that has your hind quarters moving. Noteworthy pre-solo bridge and well the solo is another dinger. This one is a current favorite for a number of reasons. “The Guard” gets real modern sounding and HEAVY with a harmonic trills in the intro solo and rhythm that drops off into an acoustic verse that would make Tesla take note, that kicks up the tempo into a rocking chorus, that falls back into that modern intro rhythm… A real cool blending of a handful of influences and they mash up seamlessly. Denny solos all over this one and they follow along that heavy, modern and blues influenced path. The closer “Fairytale” is a case study for epic balladry with piano, voice and some layered orchestrations. Very beautifully performed and played, it absolutely showcases Jackie‘s vocals, which again are stupefyingly polished, professional and what I can only assume should be well beyond her years. The orchestral accompaniments are perfect and the nylon stringed acoustic guitar solo is like a cherry on top. Bravo.

The songwriting, musicianship and production are all pro level and while its an unknown or not expected of the youngsters, we all should expect nothing less from Dennis Ward, whose mits are all over this release and for those familiar with his provenance, you won’t be able to miss his influence.

Summarizing, Glamnization is a very very good album ticking many boxes. It’s scary how talented this band is. There is no known reason why Hairy Groupies shouldn’t be first in line for a Frontiers signing, but while I’d prefer they stay indie, alas I can’t hoard all the cool bands for myself and my Martinsane’s Unknown But Must Own archives. I highly recommend this album and that you ping the band straight away and secure your copy of Glamnization before its too late. I’m a fan for certain. Well done!

Reviewed by Terry Martinson for Sleaze Roxx in March 2022