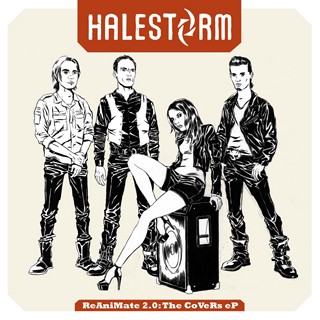 Review:
I have never been a big fan of cover albums, since I find that in most instances there are a few outstanding covers along with duller ones that miss the mark. A few examples that come to mind are Queensryche‘s Take Cover and Ozzy Osbourne‘s Under Cover, which both had some really good songs but also some real duds — for that reason, after listening to each of those CDs a few times, I have never bothered listening to them again. The one exception is Stryper‘s The Covering, which has one fantastic cover song after another. It helps of course that they mostly covered songs that I grew up listening to so I already liked the song choices that they had made, all that was left was execution — which Stryper did admirably.

This takes me to Halestorm‘s latest, and second EP of cover songs, ReAnimate 2.0: The Covers EP. Not only did Halestorm elect to rework two difficult hard rock/metal classics — Judas Priest‘s “Dissident Aggressor” and AC/DC‘s “Shoot To Thrill” — but the band also chose to cover songs from artists that I would likely not listen to such as Marilyn Manson, Pat Benatar and Fleetwood Mac… and definitely not Daft Punk. This puts Halestorm at a bit of a disadvantage compared to a band like Stryper since I wasn’t that familiar with four of the songs that Halestorm chose to cover. In any event, Halestorm pull off their renditions so well that I ended up looking forward to the songs I didn’t really know as much as the Judas Priest and AC/DC classics.

Lead vocalist Lzzy Hale does a great job of hitting all the high notes that Judas Priest frontman Rob Halford is known for on “Dissident Aggressor”. I actually like Halestorm‘s version over the original because you can decipher what Hale is saying when she belts out her screams, compared to Halford often incomprehensible wails. The biggest surprise is the cover of Daft Punk‘s “Get Lucky” — I honestly had never heard of Daft Punk until now. Halestorm‘s version of “Get Lucky” is quite entertaining — heavy at times with a bit of a disco feel to it. I eventually listened to the original version of the song and this take is a million times better — alright, perhaps not a million times better but you get the idea. “Get Lucky” should be released as a single — it could be a big hit.

The one cover that does not live up to the original is the rendition of AC/DC‘s “Shoot To Thrill”. I find that Brian Johnson‘s voice fits that song perfectly, while Hale‘s just doesn’t do the song justice, particularly during the verse. Next up is Halestorm‘s scorching and heavy version of Pat Benatar‘s “Hell Is For Children”. It has to be at least 15 years since I last heard the Benatar hit, and Halestorm takes a good song and makes it their own — turning it into a heavy and powerful mesmerizing tune. Guitarist Joe Hottinger‘s solos during the end of the song really takes it to another level.

The cover of Fleetwood Mac‘s “Gold Dust Woman” is another surprise which is a million times better (or just about) than the original — the chorus is haunting and captivating. Reanimate 2.0: The Covers EP closes with a rendition of shock rocker Marilyn Manson‘s “1996”. While this is probably my least favorite song on the EP, it is nevertheless still a good one. I will give the nod to Halestorm‘s version here, because even though Manson‘s original starts off a little stronger it gets all weird at the end.

Reanimate 2.0: The Covers EP is a fun album which showcases Halestorm‘s breadth and talent in their ability to successfully pull off good to excellent covers of different acts within varying musical genres. The final tally is that Halestorm delivers three covers that are way better than the originals — with the other three being good ones as well. What I find truly impressive is that Halestorm covers four originals that I would never usually listen to — but because Halestorm‘s take of those songs are so good I am now listening to them on a regular basis.

Review:
Thank God for Halestorm! There aren’t too many harder working bands… no wait, there aren’t too many harder working rock bands coming out of North America who are still signed to a major label and also receive some tour support, promotion and air play. I had an opportunity for a brief chat with drummer Arejay Hale a few years ago and he mentioned that Atlantic cuts them some slack and allows the band to engage in creative process as well as time to let things pick up for them in terms of popularity. This is unheard of today in the North American rock industry. Halestorm also seems to tour wherever they can, playing as many as 250 shows a year. No strangers to cover songs, the band have released their second covers EP simply titled ReAnimate 2.0.

ReAnimate 2.0 is a clever mix of classic rock, classic metal with some new pop, and grunge-era metal. Starting off is the somewhat rare Judas Priest cover of “Dissident Aggressor”, from their 1977 album Sin After Sin. Halestorm does a nice job of adding the chant of lyrics at the beginning, “stabbing and bawling, punching and crawling”, right before the ear piercing scream of Lzzy Hale gets things moving. I know I’ll probably get slammed for saying this, but not only is Lzzy Hale able to hit all of Rob Halford‘s extreme tenor notes it must be said that her voice is actually more powerful than his. A version of Daft Punk‘s uber-popular summertime hit “Get Lucky” is next, and although Halestorm has rocked it up a notch, the song still retains the elemental funk of the original.

AC/DC‘s “Shoot To Thrill” mainly stays true to the original but once again we can hear that Lzzy Hale‘s shrieking and powerful vocals are stronger than Brian Johnson‘s — even back from 1980. Pat Benatar‘s original version of “Hell Is for Children” started off sounding like a ballad with softer overtones before it picked up with the guitar riff — Halestorm‘s version metal-izes the beginning with a more brooding tone while the remainder of the song stays true to the original. Lzzy Hale does a perfect impression of Stevie Nicks in Halestorm‘s cover of Fleetwood Mac‘s “Gold Dust Woman” — this one comes across with a much more full and rich sound than the original. Lastly we have a cover of Marilyn Manson‘s “1996” — losing some of Manson‘s industrial metal sound we hear Halestorm turning this one into a more straight-ahead fist-pumping metal song while retaining the menace and anger of the original.

I’m glad that Halestorm does covers of songs that are 30 to 40 years old because we know the new young generation of fans who listen to the band will now be exposed to a bygone era of rock and real musicianship. An era when bands got together though newspaper ads or friends and had to pick up an instrument and learn how to play it, let alone write their own songs and perform them live without auto-tune trickery or lip synching.