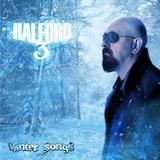 Review:
When I read that legendary Judas Priest frontman Rob Halford would be releasing a Christmas album I could hear my fellow metal heads’ collective groan. Alright, I’m not going to say that I ever figured Rob for a holiday kind of guy, but he in fact is – that’s what inspired the record. And unlike Twisted Sister, Rob has taken some traditional songs and originals and given them the Halford treatment.

For the most part Winter Songs works relatively well. Rob Halford sells the album by putting on a powerful performance, as does the ‘Halford’ band. ‘Metal’ Mike Chlasciak and Rob Z shred as they would on any regular studio album, and don’t get me started on drummer Bobby Jarzombek, who puts on a clinic on this record.

Some of the standout tracks on Winter Songs are the opener “Get Into The Spirit”, which could be considered a universal holiday track that you could play on Thanksgiving and through into the New Year as Rob kicks it into high gear from the opening lick to the last note. I also enjoy the Sara Bareilles cover of “Winter Song” and the traditional classic “Oh, Holy Night” – all in all a good effort by the ‘Metal God’.

To date this has to be my favorite holiday record. This CD isn’t as cumbersome as the stuff by TSO and it’s not cheesy like Twisted Sister‘s Christmas album. This is a record that you could put on for yourself and the family and not be embarrassed to listen to all the way through. Halford stated recently in an interview that he hopes to perform these songs live at the end of 2010. I hope he does and I hope I get an opportunity to witness it.