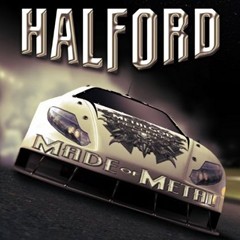 Review:
Rob Halford has returned with a new solo effort, Made Of Metal, while Judas Priest takes a short hiatus. Sure the title is a little bit cliche, as Metal God is Halford‘s brand — he has it all under the Metal God umbrella; from the Halford band music, to the defunct Fight‘s catalogue, to holiday music, to the t-shirt line.

Joining Rob Halford on Made Of Metal is Roy Z., who handles the production as well as guitar duties alongside ‘Metal’ Mike Chlasciak (there’s that word again). Made Of Metal is by no means Resurrection, nor is it War Of Words or Painkiller for that matter — it’s simply not a heavy sounding album. In fact, it’s closer to hard rock than metal.

“Fire And Ice” is a notable track if you can imagine Rob Halford doing power metal in the tradition of bands like Hammerfall and Firewind. “Till The Day I Die” features some fantastic slide guitar playing, which is a departure for Halford, yet is probably my favorite track on the album. A couple of additional standout tracks are “We Own The Night”, a power-pop meets traditional metal mid-tempo rocker that works wonderfully, and “Heartless”, which is a catchy Judas Priest sounding number.

I find it ironic that Made Of Metal‘s artwork features a stock car while the CD finds Rob coasting through a collection of hook-heavy, driving, commercial tracks. Thankfully though no guitar synth, as heard on Turbo, can be found on this one. If you were disappointed with the direction that Judas Priest went on Nostradamus, Rob Halford just redeemed himself with Made Of Metal.