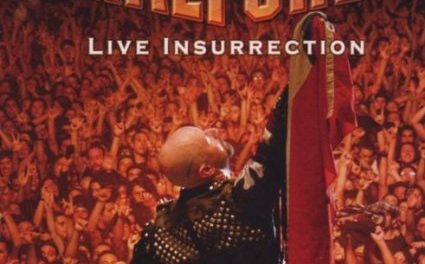 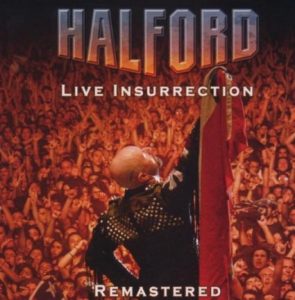 Review:
Yesterday marked the 15th year anniversary of the worldwide release (except Japan) of Live Insurrection, which is the live album that should have been for Judas Priest. It took a number of years for Rob Halford to really hit his stride after leaving Judas Priest in May 1992 but when he finally did after his Fight project and the awful 2wo‘s Voyeurs album, he came up with a heavy metal masterpiece which translated into the perfect occasion to release a stellar double live album.

Back in August 2000, Halford released the aptly named Resurrection, which was the first album under his name. If you haven’t checked out Resurrection, let’s just say that it is the studio album that the rest of Halford‘s Judas Priest bandmates likely wished they had been a part of. The Resurrection album is Halford at his best and can stand toe to toe with just about any Judas Priest studio album. In fact, ever since parting ways with Halford in 1992, Judas Priest — even with Halford back in the line-up as of 2003 — have been unable to come up with a studio release that even comes close to Resurrection. Live Insurrection sees Halford playing a good portion of the Resurrection album, a couple of Fight songs and some Judas Priest classics, some of which the band had seemingly not played in many years. It all amounts to one of the best live albums ever released to my ears and an underrated one at that.

Although the second disc is filled with killer Judas Priest classics to end the live concert as well as three bonus tracks on the remastered version of Live Insurrection, my favorite disc is the first one. That disc sees Halford play six songs from Resurrection (including one of my favorites “Slow Down”, the killer ballad “Silent Screams” and “Made In Hell” which should have been a Judas Priest classic), some stellar and heavy Fight songs (including “Into The Pit” and “Nailed To The Gun”) and a sprinkling of little played Priest classics (such as Defenders Of The Faith‘s “Jawbreaker” and Killing Machine‘s “Running Wild”). Any fan of Judas Priest should be able to appreciate the tracks on that first disc.

The second disc sees Halford play quite a few popular Judas Priest live staples such as “Electric Eye”, “Metal Gods” and “Braking The Law.” However, it is the lesser played Priest classics such as “Genocide” and “Tyrant” that make the disc really special. I can still remember how floored I was when I heard Halford close off his opening set for Iron Maiden back in Toronto, Canada on August 1, 2000 with a killer rendition of “Tyrant.” The goods do not stop there on the second disc since Halford does a surprise cover of the Scorpions‘ “Blackout” which features none other than Rudolf Schenker. Although I like the three bonus tracks on the remastered version of Live Insurrection, I would have actually preferred that those three tracks not be included because it breaks the momentum of the killer live show. You likely won’t see me complain too often about bonus tracks but it would have been better to simply close off Live Insurrection with the killer rendition of “Tyrant” and call it a day.

Overall, Live Insurrection continues to be one of my favorite live albums of all-time and the one that should have been for Judas Priest.

Halford playing Live Insurrection live in Santiago, during the 2001 tour. Copyright not mine of course; no infringements or profit intended.