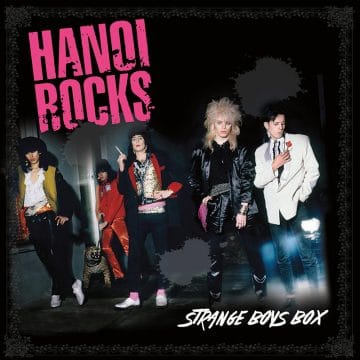 Review:
Hanoi Rocks are probably Finland’s most popular band. The band started in the early ’80s and remains a cult favourite. The likes of Axl Rose and Sebastian Bach have always waved the flag for the band.

For me, Hanoi Rocks were always an intriguing band. I loved their look. To me growing up rock n’ roll was as much an image as it was about the music. Hanoi Rocks‘ original albums were released on the small independent, Lick Records. Geffen Records re-released their first five albums in the late ’80s on the Guns N’ Roses‘ subsidiary label, Uzi Suicide. The Uzi Suicide catalog has been hard to find in the past years, especially the vinyl copies that were printed on coloured vinyl.

Things were happening for Hanoi Rocks in 1984 when Epic Records would release Two Steps From The Move. This album was produced by the legendary Bob Ezrin. It was met with critical acclaim and the momentum was very strong for the band until tragedy struck on a fateful day in 1984 when drummer Nicholas Dingley aka “Razzle” was killed in a car accident. The driver of the vehicle was none other than Mötley Crüe vocalist Vince Neil who would serve 18 days in jail and was ordered to pay $2.5 million to the victims that he struck head on in the accident. After this, Hanoi Rocks faded into obscurity until the early 2000s when Michael Monroe and Andy McCoy resurrected the band for a few years, releasing a couple of solid albums. Of course, Monroe would have a decent solo career throughout the years after Hanoi Rocks‘ demise. His 1989 release Not Fakin’ It is still considered a stand out of the ’80s era. 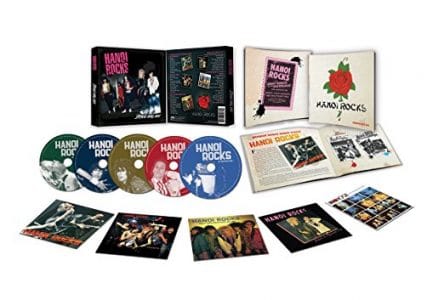 The hard to find Hanoi Rocks catalog was recently released once again this past fall on the Cleopatra Records label. This Box Set features the first five albums that Geffen had released in the ’80s. Unfortunately, Two Steps From The Move is not included in this set, which is kind of disappointing considering how solid it was and it would be interesting to hear it reissued all these years later.

The box set does includes the following albums though — Saigon Shocks, Bangkok Shakes, Hanoi Rocks; Oriental Beat; Self-Destruction Blues; Back To The Mystery City; and, the classic live album All Those Wasted Years. This box set comes in two formats. A CD set of five discs and a vinyl set of six records.

As Christmas was fast approaching, I put a bug in my wife’s ear that if there was something I really wanted for Christmas, it was this box set. Well come Christmas to my amazement, there it was tucked nicely under our Christmas tree. My preference for this box set was the vinyl version. I had never actually heard these albums in the format that they were meant to be heard on. I quickly, and carefully I may add, opened the packaging and started from the first album to the last.

What did I find about these albums? Pure magic. I was taken by the fact that Cleopatra had taken the time to package these LPs with the original photos from back in the day. The box set also comes with a full page booklet with in sight from the Hanoi Rocks members regarding different aspects of the recording process of each album. Brilliant!!!

The sound you may wonder? Exactly what I was hoping for and expecting. To me, some stuff just does not turn over well to CD. Something is lost in the transition — the feel, the rawness, the spirit. These vinyl copies really bring out the feel of the music. Hanoi Rocks were a band that really had a sound of its own and it is exemplified in these vinyl albums.

The one thing I didn’t realize until listening to these albums was what a talented and innovative guitarist that Andy McCoy is. His playing really stands out. He fits to the song, never overplaying.

Another thing I didn’t realize until reading through the book that came with the box set was that drummer “Razzle” didn’t play on the first three albums. The Uzi Suicide pressings didn’t have liner notes explaining who the players were on the releases so I just assumed “Razzle” was an origianl band member. Gyp Fasino actually played drums on the earlier albums.

Overall, Cleopatra Records has done a formidable job of re-releasing these classic albums. For diehard fans of Hanoi Rocks, this box set is a must have!!!

Production:
Produced by the “The Muddy Twins” aka Michael Monroe and Andy McCoy

Production:
Produced by “The Muddy Twins” aka Michael Monroe and Andy McCoy

Hanoi Rocks‘ “Until I Get You” live:

Hanoi Rocks ‘Until I get You’ live REMASTERED