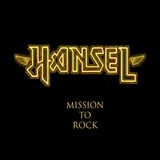 Review:
What a band wears should be totally irrelevant, and in the big scheme of things it has no bearing on the music at all. But these days, with official websites and myspace pages, you often get to see a band before you hear them, so sometimes you have a pre-conceived idea of what a band might sound like from their image or look.

Relevant or not, I can’t help but mention dress sense (or lack of) here because Australian band Hansel has one of the most innovative styles in wardrobe apparel I’ve seen since the ridiculously funny looking band Dizzy Bitch. But rather than decked out in fake furry crotches attached to pink Lycra leggings, Hansel are clad in leopard print, 70s style polyester, sequins and flowing bandanas all mixed up into one strange fashion fest. It could work as a marketing ploy because it actually sparks my curiosity as to whether these oddly attired dudes will sound as whacky as they look.

Hansel declare themselves in their bio like this: “They roam the wastelands of standard, boring, paper dry, modern Brit pop bands, leaving them in their wake with their big hair, big anthem, hard hitting, glam rock style. Glowing like a beacon in the cold dark night”, and although these guys obviously have a sense of humor, that statement isn’t as far fetched as it sounds.

“Murder 101” kicks things off and is so catchy it will get stuck in your head for days. In fact the next three tunes are more of the same catchy stuff and while nothing is hard and heavy, this is fun, infectious music. The Mission To Rock EP is four songs of pretty top notch modern rock with an 80s feel thrown into it. Hansel are tight musically and the vocals are great as they pretty much have it down pat, plus the production sounds good as well. I can’t really think of any other bands to compare Hansel to, except maybe a touch of EndEverAfter while looking like Metal Shop.

On Mission To Rock Hansel have managed to come up with some cool entertaining rockers sprinkled with glam – mission accomplished.