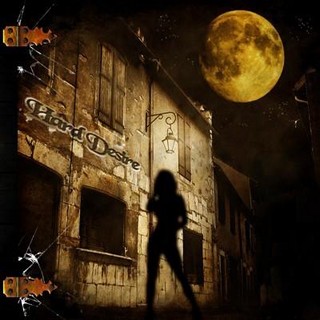 Review:
Another outfit to add to the ‘New Wave of Brazilian Metal’, which seems to be invading our ears in all its guises, and as if to add some detail to this colorful scene, Hard Desire bring an amazingly eclectic and accomplished recipe to the table. Comprising of singer De Monteiro, bassist Thiago Fernandes, guitarists Felipe Rosa and Pedro Fialho, and drummer Douglas Gomes, the band are currently making waves in their native country and beyond.

The self-titled album opens with the age old question of rock ‘n’ roll’s demise, before taking us through an electrifying range of styles from the traditional metal of opening track “New Star”, the Queen/Who inspired “Bring All The Life” and the adrenaline drenched “Up & Down”. “Fire” is an ambitious, sprawling ballad clocking in at over ten minutes, and despite the raw emotion of both the outstanding soaring vocals of De Monteiro and the stirring blues guitar work of both Rosa and Fialho, it suffers from a slight ‘kitchen sink’ feel and a little editing might have given it more impact. The mid-tempo “Gonna Dance” returns to a more trad-metal feel, “Drink Me” adds a dash of funk and “Change Of Way” opens with Fernandes‘ slapping bass trading licks with Rosa‘s stabbing riffs.

Hard Desire are a band with something to say — ‘metal for muso philosophers’ perhaps — and whilst this is a refreshing take on the genre the inserted sound effects and dialogue would benefit from a little restraint. If you like a consistent sound then this one probably isn’t for you. But listen, their passion is without question, the desire to make their own mark tangible and for that alone — I get it.

Oh yeah, I almost forgot — these guys can play — and I mean really play. The roller coaster finally begins to slow down with “The Hidden Truth”, again, a heavyweight track of epic proportions rising and falling like a swelling tide and reminiscent of Metallica‘s lighter moments vocally and Iron Maiden‘s instrumentally. Despite tackling the most difficult of beasts — a concept album, in this case centered around an individual plagued by a broken heart — Hard Desire have delivered a staggering collection of everything that keeps rock ‘n’ roll alive.