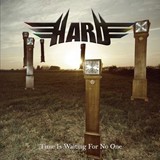 HARD
TIME IS WAITING FOR NO ONE
Released February, 2010 (Escape Music)

Review:
Not only has Krokus released a new CD this year, but so has a band that sounds a lot like them. Originally from Hungary, Hard started out playing music in their native language before tackling English on 2008’s Traveler. Now they have recruited Baltimoore‘s Bjorn Lodin (who has put his former venture on hold) to front the band, and together the Hungarian/Swedish combo creates some satisfying Krokus inspired rock.

There really isn’t anything Earth shattering or unique about Hard, but for forty plus minutes they deliver a well crafted hard rock album that never really lets the listener down. Not every band is able to create an entire CD with this much consistency, so you have to give Hard credit for that. The members of Hard really lucked out in grabbing Lodin for the microphone because his Marc Storace meets Rod Stewart delivery perfectly complements the band’s straight-up melodic rock sound.

The disc opens with a crystal clear guitar sound on the title track, and the Krokus comparisons are unavoidable. Hard settle into a steady groove on “Black Clouds” before they start to mix things up a bit. “Love Goes With Anything” is a smooth flowing ballad, the first single “Into The Fire” finds the band rocking at their hardest with “My Kind Of Woman” following closely behind. It is back to ballad mode on “Nona” and the album’s final cut “Four-Leaf Clover”.

As I said earlier, Time Is Waiting For No One doesn’t offer anything new, it is a case of ‘been there, heard that’. It is a consistently well done CD though, even if it doesn’t exactly set the rock world afire. Even though Hard sound a lot like Krokus, as a whole the album flows more like Katmandu‘s little known 1991 self-titled release, meaning that the band have yet to stumble upon an identity to call their own.