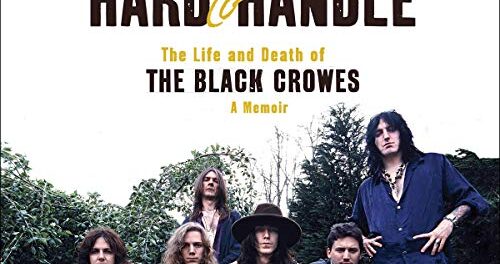 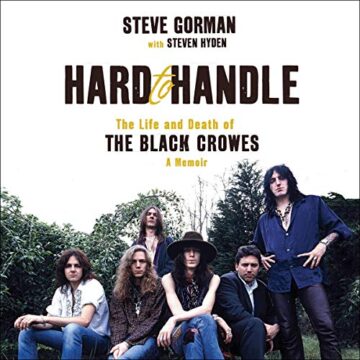 HARD TO HANDLE, THE LIFE AND DEATH OF THE BLACK CROWES
STEVE GORMAN WITH STEVEN HYDEN
Released on September 24, 2019 (Da Capo Press

Review:
While The Black Crowes are a bit outside the Sleaze Roxx wheelhouse, there’s no denying their musical uniqueness or importance. Their smash debut album, 1990’s Shake Your Money Maker, sold over five million copies on the strength of hit singles “Jealous Again,” “She Talks To Angels,” and their cover of Otis Redding‘s “Hard to Handle.” 1992’s follow up, The Southern Harmony and Musical Companion, went multi-platinum behind “Remedy,” and “Thorn In My Pride” cementing The Black Crowes as one of the biggest rock acts in the world over the first half of the decade.

Stylistically, they were hard to define. The Black Crowes were MTV darlings, but avoided the “hair band” tag. Their bluesy, Faces-inspired sound kept them at a distance from other “southern rock” bands. They rocked too hard to be considered a “jam band.” Ultimately, they were a little bit of each and as a result, The Black Crowes shared stages with Mötley Crüe, Jimmy Page, Metallica, Robert Plant, Queensrÿche, Aerosmith, ZZ Top, Oasis and hundreds of others over their thirty year career.

Steve Gorman sat behind the drum kit for all of it — the highs and lows, the coke-filled tours, the friendships with rock royalty and the fights with, well, seemingly everyone, most notably bandmates and brothers, Chris and Rich Robinson (vocals and guitars, respectively). The amount of anger and vitriol spewed in Hard To Handle cannot be quantified. It feels as if there’s an argument or fistfight on every page, across an always shifting alliance of Gorman and the Robinson brothers, with other bandmates (original bassist Johnny Colt plays a key supporting role) dragged into the drama on many occasions.

Hard To Handle is Gorman‘s version of The Black Crowes’ story. He freely admits others may see the same scenarios differently. With that caveat out of the way, Gorman is brutally honest throughout. The stories are often cringe-worthy. Misery and selfishness abounds. The Robinson brothers are painted as narcissists, greedy, phony and usually at cross purposes. Arguments and fights are daily occurrences. “A good day in The Black Crowes was just a day that wasn’t bad,” Gorman writes. His anger leaps off the page. All of this makes for one of the best rock books I’ve ever read. At best, I’m a casual fan of The Black Crowes. No matter. I couldn’t put Hard To Handle down.

Everything is covered. The amazing success of Shake Your Money Maker, the wild tours, the fights, the controversies with Aerosmith and ZZ Top, the slow downward trajectory off the top of the rock mountain, the harsh realities of band politics, several death knells, business dealings, personnel changes, resurrection and redemption with Jimmy Page, the fights, greed and more and more fights.

No one is spared. Not Kate Hudson, Axl Rose, Joe Perry or Oasis‘ Liam Gallagher, who Gorman at one point wanted to beat up so badly, he broke into Gallagher‘s backstage trailer, refusing to leave until he could confront the singer. Chris and Rich Robinson get it the worst, and while Gorman acknowledges the camaraderie that at times existed, the brothers come off as endlessly obstinate and sabotaging, both to the band and themselves.

Revelations abound. Gorman thought Joe Perry was a jerk the first time he met him. Mötley Crüe were surprisingly cool. A fateful meeting with The Grateful Dead caused Chris Robinson to want to the Crowes to pivot into “jam band” territory, alienating a large portion of their audience. Later, Robinson spun 180 degrees and seemingly was interested in taking a boatload of money to open for Bon Jovi, who were viewed as the anti-Black Crowes by the rest of the band. Gorman talks about this and other seismic decisions — and the negative business repercussions that came from most of them. Every page seems to have a story of new damage, often self-inflicted by one of the Robinson brothers.

One notable example occurs when Gorman learns, long after the fact, the real reasons behind the demise of The Black Crowes‘ 1999 collaboration with Led Zeppelin‘s Jimmy Page, which resulted in the certified gold Live At The Greek release. The album, and the Crowes‘ return to straight up rock and roll had put the band back on the map after a five year career spiral. So successful was Live At The Greek and the excitement around it that The Black Crowes + Jimmy Page launched a full scale tour in the summer of 2000, only to have Page bow out citing a bad back roughly a dozen shows into the trek. Page‘s leaving never sat right with Gorman. Things had been going really well and when Gorman checked in with Page about his back, the legendary guitarist had told him he felt great. This conversation allegedly took place a few hours before Page left the tour. Gorman was devastated and confused.

Cut to 2002, and Gorman and Page link up again at a Roger Daltrey benefit concert. It was here the truth of what really happened (according to Gorman) came out. Apparently, Jimmy Page had approached Rich Robinson about lending some help on the next Black Crowes record; offering to produce a track, contribute a solo or even co-write some songs, claiming he had some new ideas. Per Page, Robinson declined the offer. “No thanks. We’re good,” Rich reportedly said. Gorman‘s head exploded when he learned of this. “I was shaking with anger,” Gorman writes. “I was completely out of my mind. You [Rich] said ‘NO’ to Jimmy Page? Jimmy ‘fucking’ Page came to your door and you said ‘NO’ because you and Chris have a great batch of new songs? Really? What songs?”

Gorman then goes on to slam his own band’s catalog, pointing out the ridiculousness of a guy (Rich Robinson) who wrote “Greasy Grass River” saying “no” to one of the primary songwriters in Led Zeppelin: “How is it even remotely possible that you could think to say, ‘Nope, I don’t want to hear some BRAND NEW FUCKING RIFFS FROM JIMMY FUCKING PAGE‘?!? What other guitarist on planet earth would think that?!? What other musician on earth would think that?!?”

That’s one of probably 200 crazy, frustrating and often funny stories relayed throughout the book’s 344 pages. The narrative  moves fast and it was smart of Gorman (and co-author) Steven Hyden to skip the usual “when I was 10, my teacher was an asshole” origin story and instead get right to it. Gorman meets Chris Robinson on Page 4. The book is better for it given the amount of stories Gorman has to tell. There’s sex and plenty of drugs in Hard to Handle, The Life and Death of The Black Crowes but it’s the rock and roll that ultimately fascinates.

Verdict: One of the best rock books on record. An insanely good read.