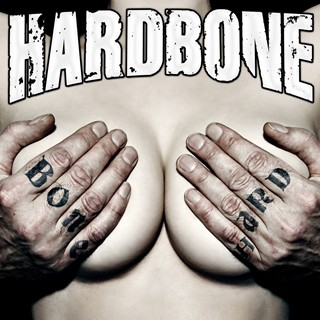 Review:
For two full-length albums Hardbone delivered a massive blow to the mid-section with their unrelenting and over-the-top Airbourne meets Bullet metal assault. There was only so far these German’s could go with that sound, and singer Tim Dammann‘s gravel throated voice, before they became a caricature of themselves. That’s what makes Bone Hard so damn good, because they added an element to their delivery that they never really hinted at previously — melody!

Hardbone with melody and harmony? Who would have ever pictured such a combination? I know I didn’t, but Bone Hard works so well on all levels that these energized rockers have really stepped up their game. While Dammann was a screamer of epic proportions, and still is, he proves on this release that he is also capable of singing (something many may have felt was out of his reach) — and in the process adds a component to Hard Bone that makes them even more exciting and accessible than ever before. The old sound is still prevalent here, as heard on “Take It Off”, “One Last Shot”, “Taking You Down Tonight” and “Fire” — tracks that employ a take-no-prisoners approach and are as rough around the edges as they are fast and furious. However for the ‘new and improved’ Hardbone sound check out “Sound Of The City”, a three chord mid-tempo rocker that hits all the right notes. “Move On” is another track that you can almost sing along to, almost sounding like Krokus at times, while “All Night Long” open with an Airbourne reminiscent guitar riff before settling into a delectable groove.

I loved Hardbone before, but the addition of tempo changes has turned them into an even stronger force. Bands like this often paint themselves into corners, because there is only so far you can take this brand of hard rock — but Bone Hard caught me completely off guard and shows a side of Hardbone that was previously unconceivable. With this release Hardbone have catapulted among the top of the ‘AC/DC clones’ while offering glimpses into their musicianship — which isn’t as one dimensional as previously thought.