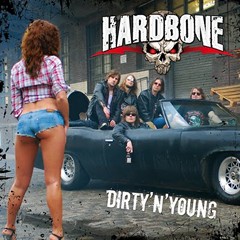 Review:
Don’t you just love it when young bands burst upon the scene with bad attitudes and a penchant for shit-kicking rock ‘n’ roll? I certainly do, and Germany’s Hardbone is the latest group of sleazy degenerates to combine the sound of AC/DC and Rose Tattoo with the over-the-top energy of Airbourne and Bullet.

Hardbone vocalist Tim Dammann doesn’t really sing, instead he growls lyrics that focus on sex, booze and more sex. It’s a tried-and-true formula, one that has been propelling hard rockers for years, and few do it as convincingly as Hardbone have on their debut album Dirty ‘N’ Young. If you want political correctness you might as well start running for your lives… because these young upstarts are hot on your heels with alcohol tainted breath and raging hormones.

It is the simplistic and animalistic nature of Dirty ‘N’ Young that sells the album. With lyrics such as “Got a nice young lady and a bad ass bitch, one for the bills and one for the itch” you know these five guys don’t give a shit about saving the whales — instead they are driven by the fans that come to their live shows and the groupies that show their appreciation afterwards.

I could go on and on about Hardbone‘s sound, but I think everyone already understands and knows what sort of attitude driven rock they are delivering. There is no filler on the CD, and few surprises either — but this type of music isn’t about expanding the envelope… it’s about climbing under your skin and shaking the hell out of you.

I can’t say enough god things about Dirty ‘N’ Young, even the artwork itself takes me back to the low-budget and male-chauvinistic sexuality of the mid-’80s — a time when booze and drugs flowed freely, women were sexual objects and musical villains like Hardbone crisscrossed around the country in search of fun and danger. A line during the final track “Unlocked ‘N’ Loaded” sums up Hardbone perfectly — “this band’s a weapon, and it’s ready and aimed at you”.