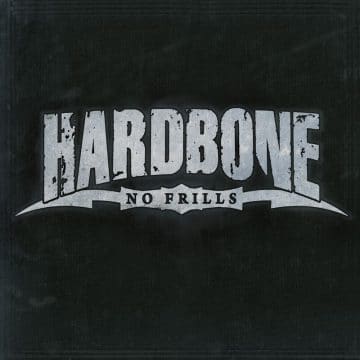 HARDBONE
NO FRILLS
Released on May 8, 2020 (Rude Records)

Review:
Most people have been through this at sometime in their work career. New management comes in and all of a sudden, the “favorites” from the old regime are forgotten and sometimes plain expendable. New management cleans house and you’re lucky if you’re still standing at the end of the day. I am embarrassed to say that this is kind of what happened with Hardbone and their coverage on Sleaze Roxx once I took over the reigns of the website in mid-2015. Although technically, there’s been just about the same amount of coverage for Hardbone on Sleaze Roxx from mid-2015 onwards as there was prior to that time, most of that post mid-2015 coverage has come in the last six months while beforehand, the band’s coverage on Sleaze Roxx was spread out nicely over a number of years. In fact, the German rockers were flying high in the eyes of my predecessor Skid with their debut album Dirty ‘N’ Young landing the #5 spot on the Sleaze Roxx’s Top Ten Albums of 2010 and their sophomore album This Is Rock ‘N’ Roll faring even better with a #3 finish on the Sleaze Roxx’s Top Ten Albums of 2012.

Even though my predecessor sang Hardbone‘s praises once again with their third album Bone Hard in 2014, the new Sleaze Roxx management (i.e. me) came in and all of a sudden, Hardbone were pushed over to the side. I didn’t do it on purpose but somehow these German rockers fell through the cracks for a number of years until this year when they caught my attention with their very enticing album title No Frills. It’s not like I wasn’t aware of Hardbone as their debut album Dirty ‘N’ Young figures in my CD collection and I am still dumbfounded how I hardly even covered the band’s fourth album Tailor-Made released back in 2016. Funny enough, I remember seeing the cover for that album but simply forgot about it over time. Although I am at a loss to explain why Tailor-Made was not properly covered on Sleaze Roxx during the last few years, I am pleased to right a wrong and review Hardbone‘s latest album No Frills.

As previously stated, the album title No Frills was quite enticing. I knew right away that Hardbone would be delivering their brand of Airbourne meets Bullet in likely simplistic but great fashion. By the time that I heard Hardbone‘s video teaser for their upcoming album, the band had my attention. The first video for single “Bang Goes The Money” was straight up hard rock with an easy chorus to sing along to. By the time that I saw the video for the second single “Back In The Day”, I was really intrigued with what the new album would sound like since Hardbone seemed to be branching off from the stuff from their first two albums with some really good melodies. As it turns out after revisiting my predecessor’s review for Bone Hard, it seems that Hardbone had already ventured into the more melodic world with their third album (which I really need to pick up). The final nail in the coffin that pushed me to purchase No Frills was the extra live CD that was available for the expanded limited edition of the album. I’ve always been a sucker for live albums so having Hardbone perform a “best of” live set for the Wacken faithful was really appealing to me.

As it turns out, the track “Back In The Day” is a bit of an anomaly on No Frills since Hardbone did their best Jetboy impression with that song but it was only for that one track. If you’re hoping for more tracks in that vein, you’re not going to find it on No Frills as the rest of the material is more standard Hardbone fare. That being said, the standard Hardbone fare on No Frills is really good. I can honestly say that there isn’t one weak track on the record and in fact, I’ve enjoyed listening to the studio album No Frills more than the record Live At Wacken Open Air 2018 even though it’s really the latter bonus CD that made me take the plunge on No Frills in the first place. The one track that really stands out on the live disc is “Walking Talking Sexmachine” which can be found on Hardbone‘s debut album. I had forgotten what a great song it really is.

In terms of No Frills, from the opening chords of “Bang Goes The Money”, you know pretty much what you’re going to be getting and that’s straight up fast paced rock n’ roll highlighted by singer Tim Dammann‘s raspy vocal delivery. “Off The Beaten Track” just picks up where “Bang Goes The Money” left off with another easy to sing along to chorus. The third track “Too Hot” is probably one of the most “melodic” tracks on the album in an Airbourne kind of way and would be a good choice for the next video in support of the record assuming there will be another one. Given that every song on No Frills is a good one, there’s no point in going track by track. Speaking of Airbourne, with the Aussie rockers kind of free falling from grace with their last album Boneshaker not making Sleaze Roxx‘s top ten albums of the year or even the Sleaze Roxx readers’ top 20 albums last year, Hardbone seem well poised to take the Aussie rockers’ spot as the resident straight up no nonsense hard rockers.

While Hardbone did suffer quite a bit coverage wise with the new incoming Sleaze Roxx management during the last five years, I am pleased to say that the new management now fully recognizes the band’s brilliance. Don’t be surprised to see Hardbone return this year to the Sleaze Roxx’s Top Ten Albums of the Year list.

Hardbone‘s “Back In The Day” video: