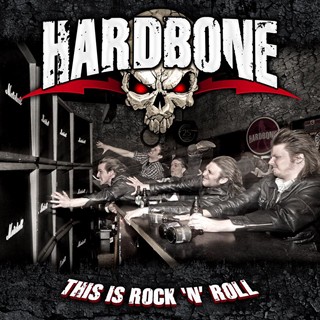 Review:
I’ve always admitted that my musical tastes are pretty simple and straight-forward. Give me AC/DC‘s three-chord rock and I’m a happy man… give me Airbourne supercharged take on the Aussie legends and I’m thrilled… give me an even more volatile version of that proven formula and I’m damn near in ecstasy. Germany’s Hardbone fit into the last category, and after being blown away by their Dirty ‘N’ Young debut I wasn’t sure they could get any better — I was wrong.

The band remains as dirty and nasty as ever, and singer Tim Dammann‘s voice continues to sound as if he feeds himself solely on cigarettes and broken glass, but the production on This Is Rock ‘N’ Roll is more professional than that found on the debut and gives these sleazy rockers an even heftier sound. Fans of the high adrenaline rock mastered by groups such as Airbourne and the criminally underrated Bullet will love Hardbone — I guarantee it.

When the opening track “Bottlemate” begins it’s as if invisible entity is flying out of the speakers to boot-stomp you across the chin — it gives you an idea of what you are in for during this ten song scorcher. Each and every song is delivered with that same type of intensity, and if you’re waiting for a ballad or sappy love song be prepared to die a slow death. The gang vocals of “Girls & Gasoline” bring back the old days of AC/DC, when they were as young and hungry as Hardbone are today, while “One Night Stand” is even more venomous and hits harder than Rhino Bucket‘s classic of the same name. The title track and “The Only Thing” (you have to love the lyric of “rock ‘n’ roll is the only thing worth dying for”) are really the only songs in which the band let down their guard (ever so slightly) — of course both are groovy hard rockers, yet they aren’t as outrageously over-the-top as the rest of the album and would fit perfectly beside Airbourne on rock radio.

This is the type of music to listen to while drinking massive amounts of alcohol — enough to turn your liver the color of Kermit The Frog — but as I’m writing this review my ears are the ones taking a sonic beating by the sheer volume this album demands to be played at. Naming the CD This Is Rock ‘N’ Roll is a blatant case of stating the obvious, as it’s Neanderthal and chest-beating approach captures the true essence of hard rock.