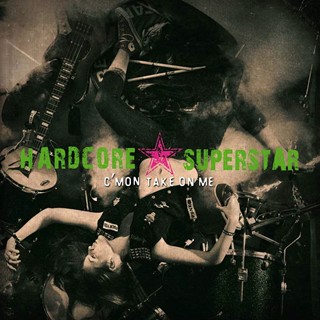 Review:
The Swedish metal heavyweights Hardcore Superstar have released their ninth studio album C’mon Take On Me. This one turns out to be a much more polished sounding album than 2010’s Split Your Lip, however it does continue the band’s move away from their more Metallica-influenced thrash elements that became prominent on previous releases Dreamin’ In A Casket and Beg For It. This time around Hardcore Superstar have continued on towards their roots of catchy hard rock with a few twists.

The album opens with the short instrumental intro “Cutting The Slack” that sounds more like a soundtrack for a touring circus act than a metal band — I’m not sure what they were thinking when they included this. The album quickly recovers though with the title track that leads the listener through what you would expect from a Hardcore Superstar song — smashing drums and pounding bass from a rhythm section made up of Martin Sandvik and Magnus “Adde” Andreason. Vic Zino‘s versatile guitar work can easily transition from thrash to melodic hard rock, while Jocke Berg‘s vocals seem to become more crisp, clean and powerful with each album. His high pitched tenor shrieks are now completely unmistakable in the metal genre.

“One More Minute” was the first single and video released off C’mon Take On Me — it is unmistakably Hardcore Superstar but leads the listener, at times, to wonder if it may have been compiled from two or three different songs that were jumbled into one. By no means a weak song, the band just seemed to try to capture every songwriting element of what they have the capacity to do: there’s a chant at the beginning, followed by a solid guitar riff, then an acoustic piece with Berg‘s screaming vocals which break out into a melody and suddenly a melodic chorus. In the middle of the song we get one of Zino‘s obligatory solos but this is where we get a small thrash element. “One More Minute” is a bizarre and original composition but it works — and does so very well.

The following track takes the cake of any song on this album, and arguably any Hardcore Superstar composition on any of their past releases. “Above The Law” locks up a solid riff and among the strongest of choruses, verses and gang vocals I have ever heard from a hard rock song. In my opinion Hardcore Superstar have outdone themselves with this monster catchy track, and they were wise to release this one as their second single and video. “Are You Gonna Cry Now” serves some straight-up metal, perhaps a little more reminiscent of the Dreamin’ In A Casket and Beg For It albums. This is however where the band starts to lose their momentum on C’mon Take On Me. “Stranger Of Mine” drifts into ballad territory while “Won’t Take The Blame” parts 1 and 2 are not bad songs but do not capture the excitement of the previous tracks. The same goes for “Dead Man’s Shoes” and “Because Of You” which seem to experience a sudden attack of seriousness. Again, they are not bad songs but are mildly forgettable when compared with the earlier tracks or other Hardcore Superstar albums.

C’mon Take On Me does recover momentarily with “Too Much Business”, as the band sounds like they have dusted off an old composition abandoned from their early roots or classic rock influences. It almost sounds like an old ’70s BTO song but done with the grit and aggression that Hardcore Superstar can deliver. The recovery quickly fades as the last song, “Long Time No See”, is another ballad in an album that already contains enough slow elements.

All in all, I approve of C’mon Take On Me, but if you’re looking for a hard rock album from start to finish you won’t find it here. Not that a complete headbanging album is everyone’s cup of tea, but thankfully the strong songs on this album are good enough to overshadow the slower compositions.