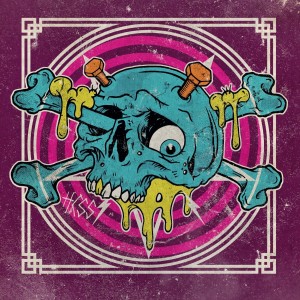 Review:
Admittedly, I was one of the late people to the party to get on the Hardcore Superstar bandwagon. The first album that I heard was Split Your Lip and I absolutely loved it. So I decided to get the next two albums, which I also really enjoyed. Beg For It and Take On Me were both in my rotation for a while. Since I had really liked these albums, I went back deeper into their catalog and found that their sound was once quite a bit different. It was definitely more melodic pop sounding and lot less of the heavier sound that I had associated them with. So, I skipped those albums and decided they must have changed direction for the better, starting with Split Your Lip.

I was anxiously awaiting their new 2015 release called simply HCSS. However, before it was released, I began to hear comments from the band that they were looking to return to their roots. And after listening to it, I can confirm that this is true. I wouldn’t say that they have gone all the way back to the beginning, but they certainly have tried to create a more hybrid sound of the original sound and the heavier tones of their recent releases. But that’s not all bad. It seems the band wanted to experiment a little more with this release. Being creative is what keeps bands from getting boring and sounding stale. So I will give them credit for trying a few new things.

The album starts off with the track “Don’t Mean Shit” which is a heavy track with a melodic chorus. This trend continues with “Party ‘Til I’m Gone,” “The Cemetery” and “Off With Their Heads.” Things start to change a little with “Fly.” This track is a little different and less formulaic than the previous tracks. At first, I wasn’t very impressed with it, but if you keep listening, it’s actually quite a powerful track that’s full of emotion. The same can be said about “The Ocean”. After hearing the bubblegum sounding chorus, I really wanted to dismiss this song altogether, but they seem to have found the right mix of heavy and pop to keep me engaged. Also, the chorus is catchy as hell, so even though it’s not my cup of tea, it is well done.

The most experimental track by far is “Touch The Sky.” I’m not sure exactly sure what they were going for here sound wise. This sounds like a pop song for today’s top 40 radio or possibly something you might hear in the background of a commercial. I can easily say that it is my least favorite track altogether. “Growing Old” starts out sounding very pop but winds up reminding me at times of a Tesla track mixed with a little bit of Jane’s Addiction. “Glue” is another mixed bag of styles and probably my second least favorite track. They close out the album with “Messed Up For Sure” which is another heavier rock track.

This is one of those albums that’s really hard to rate, simply because it’s such a mixed bag. To say that I dislike this album would be wrong. But I will say that is not what I expected from Hardcore Superstar. Personally, at the end of the day, it’s just not sleazy or heavy enough for my liking. There are some really good tracks mixed in here, but not enough to overcome the overall feel of the album. If you like melodic metal with a modern pop twist, then you will probably like this album a lot. Otherwise, let’s hope for a return to form on the next outing by Hardcore Superstar.