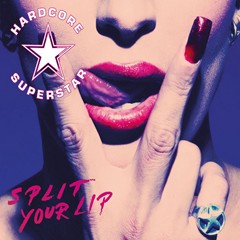 Review:
Hardcore Superstar‘s motor is running hot — a mere 17 months after the release of Beg For It the Swedish sleaze legends are back with their 8th album entitled Split Your Lip. Although Beg For It was a success for the band, they had to take quite a lot of criticism from the fans concerning their polished and metallic production. Personally I thought Beg For It was a mighty strong album, however Split Your Lip shows (in retrospect) that the predecessor might be the weakest record since the band’s second coming in 2005.

Drummer Adde said in a press release that the band wanted Split Your Lip to sound like ‘domestic violence’, therefore it was recorded live in only five days — and it shows! This album is a much rawer affair than Beg For It and even Dreamin’ In A Casket, evoking the same feel in sound as their 2005 self-titled release did. Along with that also comes a return to the sleazier songwriting of that classic album, which means less complex song structures and more melodic choruses.

While Hardcore Superstar always knew how to write a catchy tune, I think they’ve nailed it this time in terms of quantity. “Guestlist” and “Last Call For Alcohol” are instant crowd-pleasers which will probably end up in the setlist alongside their uber-song “We Don’t Celebrate Sundays” for many years to come. These two songs definitely stand out from the rest right from the first spin, but there’s much more being offered. The title track, “Moonshine” and “Bully” all thrive from insane catchiness — and while I thought the acoustic “Here Comes That Sick Bitch” would end up being a weak intermezzo, it’s a real grower and a welcome change of pace. The last three tracks, “Won’t Go To Heaven”, “Honeymoon” and “Run To Your Mama” fade a bit in comparison to the first 8 songs, but still end another winning album from Hardcore Superstar on a high note.

So, is Split Your Lip as good as the band’s self-titled effort? Maybe not, but it comes terribly close and is definitely up there with Dreamin’ In A Casket — which means it should be on every sleaze-lover’s ‘to buy’ list.