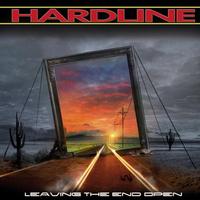 Review:
Hardline is back with their long awaited third album Leaving The End Open. Listeners of my radio show ‘Purrfect Timing’ know how much I love this band, but they also know I am always honest in my reviews, so this time will be no different.

Hardline was formed in the early 1990s by brothers Johnny and Joey Gioeli, and with Journey‘s Neal Schon released Double Eclipse which is still considered to be a classic of the melodic rock era. Hardline II was released a decade later to mixed reviews, although I have always considered it to be a very good album. Flash ahead seven years later, and Johnny Gioeli‘s vocals are as powerful and melodic as ever.

For the first time, Joey Gioeli is not on a Hardline album and his presence is missed. Josh Ramos is still on lead guitar, and he continues to energize the songs with melodic, edgy and intricate guitar work, as well as co-writing most of them. Michael T. Ross on keyboards is truly an amazing addition to this band as the piano playing on this album has given the songs a feeling that would not be there without him.

Johnny Gioeli once gave an interview which has proven to be quite telling, “I want to get back to my roots when I was making music just to make music…I think I’m looking more to the rock/pop and big ballad kind of sound. Something a bit different from what people are used to me doing.” And with Leaving The End Open he’s done it – this is a powerful and expressive album with a mix of melodic hard rock and ballads.

The first track “Voices” delivers the message and it’s coming from a good place – it’s a ‘positive, jump as high as you can’ kind of song and it lets you know what to expect, coming on strong with some heavy guitar riffs and those great edgy vocals that break into a progressive melodic chorus – and it just gets better every time you listen. There’s an almost seamless transition to “Falling Free”, which also has a more modern, up-tempo sound to it. The percussion and guitars run an electric current through the chorus…with the promise of freedom in the distance… “so take a breath and let’s take a ride, tear down the walls you hide behind.”

The minute you hear “Start Again” you’d know this was Hardline because it’s their classic ballad style…it shows a love that’s slipping away, the need to heal wounds and a belief that you can find happiness after heartbreak. The guitar solo here is as captivating as the starry night described in the song. Next is an edgy, contemporary track “Pieces of Puzzles” that might throw you for a second or two – it comes off rough but get into it and you’ll find a smoother melodic vocal and traditional AOR guitar lines hidden inside.

“Bittersweet”, with its harmonies and soulful guitar work really lets the lyrics breathe…again, a love on the edge of a cliff, wondering if it can be saved or if it’s just a fragile memory that couldn’t last. This song was so reminiscent of Neal Schon‘s guitar style that I almost double checked the liner notes. Josh Ramos has infused this song with a feeling that is typically unique only to Journey.

“She Sleeps In Madness” has an edge to it but it didn’t have quite the strength and melodic quality of some of the other tracks, so I felt it didn’t flow as well in this album. “In This Moment”, with the simplicity of its beautiful lyrics and piano, may possibly be one of the best ballads I’ve heard. It leads into what was one of the biggest surprises on this album, “Give In To This Love.” This is a progressive, hard rockin’ piece with an absolutely headbanging quality to it in some parts. It’s got a heavier, deeper groove but is still full of melodic vocals, and I should warn you it’s positively addictive.

“Before This” has more traditional melodic elements and the guitar riffs really play off the lyrics well. There’s a cutting edge to this song that perfectly leads into the next track, “Hole In My Head”, which has that growl in Johnny‘s vocals that I like so much and a bassline that really makes the song. There’s a wicked roughness to this one, and an aggressiveness that really seems to flirt with the dirty groove from Double Eclipse.

I started out this review saying I wouldn’t make comparisons to the first album, but for the title track I will make an exception – “Leaving The End Open” is absolutely as lyrically powerful as “In The Hands Of Time.” This song turned out to be my favorite track on Leaving The End Open and I can’t deny that’s largely because of the power and feeling in Johnny‘s voice. It is a soaring vocal and lyrical piece that reveals the heart of this album. The brilliance of the piano and guitar work just flows through, opens up and crashes against any resistance you could give to the feeling this song creates.

It seems like every time I hear music from Hardline, I find myself liking them even more. I think it’s because guys like Johnny Gioeli just keep getting better, always revealing more depth to their character, as well as more vocal ability because he is not afraid to explore. But he didn’t make this album alone – far from it. Although he is the heart of this band, Josh Ramos and Michael T. Ross have added a depth and a power to it; they are wholeheartedly infused into these songs.
The songs on Leaving The End Open may take you a few spins to fully appreciate all they have to offer, but then they become positively addictive. For those of you who have been into either more classic rock or even heavier metal, you will probably find yourself exploring more melodic rock after this.
So just press play, shift into drive and head into the melodic horizon.

Reviewed by Purrfect Timing‘s Allee Martell for Sleaze Roxx, May 2009.