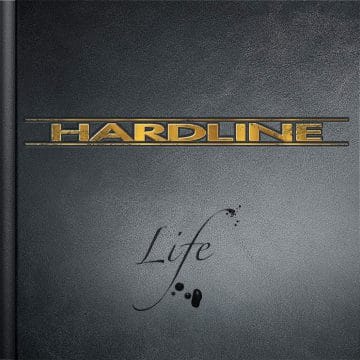 HARDLINE
LIFE
To be released on April 26, 2019 (Frontiers Music Srl)

Review:
Johnny Gioeli has kept his vision of the band Hardline going strong since 1992. If you’ve ever had the chance to meet Mr. Gioeli, you can attest to the fact that after all these years, he’s still passionate about everything he puts his voice too. What I can also say about Gioeli is he is one of the most positive and funniest people I have ever met. When I listen to his music, I can always hear his personality within the music. That is a quality that I think really works to his advantage. As I ponder that phrase, it has me thinking about other artists and how their music comes off to me. Do you think Kurt Cobain was actually that pissed off? Were some of the ’80s bands really that into constant debauchery and sex? Geez, I’m not opening that can of worms. We’ve all seen The Dirt by now. You answer that question yourself.

Hardline‘s Life is the third release of music by Gioeli since last summer. The other two releases being the first Gioeli/Castronovo album and of course the very stellar Johnny Gioeli One Voice solo album. The intriguing part of the One Voice album is that it was written by Gioeli and former Raquel guitarist Eric Gadrix. Within the confines of the release, an amazing chemistry developed and brought forth some top notch songs. One Voice is just a fantastic release. Of course, all three of these releases have been on the Frontiers label, which seems to be the norm these days for bands of the ’80s and early ’90s.

Regardless, what can I tell you about Life? Well, from the first notes of the lead-off track “Place To Call Home”, it becomes blatantly obvious that Gioeli has worked hard at staying true to the original Hardline sound that was made famous way back in 1992. In terms of this track itself, this is an in your face rocker that has you jumping from your seat. I was lucky enough to receive a copy of this album about two months ago. Gioeli was kind enough to advance the album to me with the condition that nobody but myself hear it. To not break his trust, I was quick to oblige that request. That’s a tough thing to do though. It’s one of those things where you want all your buddies to hear it, but you know they will have to wait. You can talk about it, but you just can’t let the cat out of the bag. Come April 26th, the whole world will get to hear what I’ve been enjoying for months. Trust me, if you love the very first Hardline album Double Eclipse, you will enjoy Life.

The track “Take a Chance” is so infectious that when it’s finished, you may want to rewind the tape and play it again — oh damn, this isn’t 1990 anymore. This is on digital format. I’ll just grab my phone and hit the restart button. That’s only for another week though, as my vinyl copy is set to arrive on April 26th, so I’ll just have to re-drop the needle! “Helio’s Sun” is another great melodic track that does not disappoint. The question is, “Who’s Helio Johnny?” Now, of course, a Hardline album would not be complete without a heartfelt ballad. “Page Of Your Life” is a piano driven ballad that Gioeli truly shines on. In my eyes, Gioeli is one of the best vocalists on the planet, so it’s as expected.

“Out Of Time” gets the all-out melodic hard rock train back on the track. It’s a killer track with a hook laden chorus. “Hold On To Right” and “Handful Of Sand” seem to flow nicely within. Two hard rocking tracks that really sound great. Then to keep with the curriculum, another ballad rears its head. This is the Hardline formula I think as it’s been shown on past releases. “This Love” is heartfelt and firmly sets the tone of the album. It’s the highs and lows within that keep the listeners’ attention. Well done.

“Story Of My Life” may well be my favorite track on the album, as it features an in your face guitar intro that builds into a verse that allows Gioeli to breath within the vocal. Of course, the guitar backs off slightly allowing the drums and bass to drive Gioeli’s strong vocal delivery. Then it builds up again into a truly resonating chorus. A nice touch is the ’70s sounding organ done by keyboardist Alessandro Del Vecchio who’s playing off the guitar of newcomer Mario Percudani in the solo section. Calculated perfectly and very much gives the track a Deep Purple / Whitesnake feel. “Who Wants to Live Forever” is the third ballad on the album and frankly sometimes I don’t enjoy too many ballads on one album, but when it’s Gioeli singing and the simple fact that this is a song originally recorded by Queen and iconic singer Freddie Mercury, I can look past that and truly enjoy what is set forth. A true tribute to the legacy of an amazing talent who was lost far too early. Gioeli really does an amazing job of captivating his audience through his execution and pure emotion vocally. Guitarist Mario Percudani truly emulates the solo of Brian May perfectly as well. The tone and expression are what is expected of someone who is covering what may be one of the greatest and epic rock n’ roll bands ever. A job very well done and honestly I feel it takes a lot of balls to cover a band such as Queen and stay true to the original vision.

The album closes out with the tracks “Chameleon” and “My Friends.” They both possess an essence that shows extremely well written compositions. Like all past works of Gioeli and Hardline, the music within is an eargasm of highs and lows. When you get a new release from this great band, the chances are very good that you will take away something new and exciting. Music is such an expression of character and for me, Gioeli, like I mentioned before is always true to his personality and it shows throughout what he puts on tape. A definite must have album for the purest of melodic hard rock fans. “Great job Johnny! Yeah man, this is awesome! Ya gotta check this out man!” Thanks Neal!!!

Subscribe here for more videos – http://radi.al/SubscribeFrontiers | From the album LIFE. Get your copy on CD/LP/Digital NOW: http://radi.al/HardlineLifeFol…

Hardline‘s “Page Of Your Life” song:

Subscribe here for more videos – http://radi.al/SubscribeFrontiers | From the album LIFE. Get your copy on CD/LP/Digital NOW: http://radi.al/HardlineLifeFol…

Johnny Gioeli singing Hardline’s cover of the iconic Queen song “Who Wants to Live Forever.” The track will appear on the band’s sixth studio album, LIFE, …